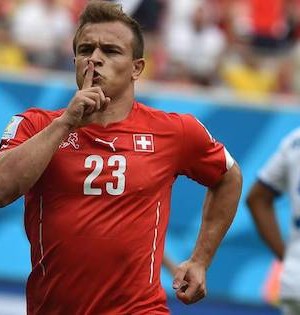 After a couple of weeks out due to a lack of anything decent to write about transfer-wise and a very entertaining fortnight of World Cup football, welcome to this weeks Fantastic Four transfer update. A look at what’s in the media about possible additions to, and indeed departures from, the Liverpool squad for next season. As per usual with our comprehensive Bullshit Rating. One for a dead cert and give for a total stinker.

Adam Lallana – After weeks of speculation and occasionally on my part, skepticism it looks as if a deal is about to be done for around £25m. An a figure that I still believe is inflated for this player but he’s definitely useful. The BBC report that an offer in that region has been accepted by Southampton. I’d say the saints were probably holding out to see if Lallana excelled at the World Cup so they could cry out for more. Error. As The 26 year-old was merely a bit part player at best, and England were there usual woeful selves, there’s a fat chance and Adam Chance of that happening now. BS Rating: 1 – looks to be a done deal. Reports even suggest that a medical is planned for this afternoon.

Luis Suarez – After redeeming himself with a superb season last term netting 31 goals and earning the coveted PFA and Writers’ Player of the year awards, the 27 year-old Uruguayan striker implodes in the World Cup tie against Italy and bites Giorgio Chiellini. Never has there been a better example of hero to zerothan Luis. Now saddled with a four month ban from any participation in football, it seems odds-on that Liverpool will cash in on their chomp-happy striker. My personal opinion is that Brendan Rodgers will be doing the right thing by getting shot of him. If Liverpool can secure the reported £80m from Barcelona as reported in the Mirror, then they’d be daft not to do business for a player that cost them a quarter of that amount. I think the ban is fair. Perhaps a little harsh for Liverpool but if you think all things in life are fair then you’d be deluding yourself. Just ask Chiellini or Zlatan Ibrahimovic. BS Rating: 2 – It’ll be good business for Liverpool and with all the baggage surrounding the player, it’s probably better to get rid of him now and spare any future embarrassment.

Xherdan Shaqiri – following his bright showing in the World Cup, it appears that Liverpool’s interest in Bayern Munich’s 22 year-old attacking midfielder has escalated. I am a big fan of Shaqiri and I think his signing would be a fantastic addition to Adam Lallana, Rickie Lambert and Emre Can (pronounced chan). Henry Jackson at This is Anfield quotes Italian news hack Gianluca Di Marzio who says that the player’s representative is “currently in England finalising a deal”. Let’s hope he’s not at White Hart Lane. BS Rating: 1 – I think this is a very likely next signing for Rodgers. His hat-trick will only have increased his stock and for an alleged £15 would be a good price.

Alexis Sanchez – With rumours if interest from Barcelona for Suarez, Talksport claim that the Spanish giants are prepared to offer the 25 year-old Chilean as part of a swap deal. This would be a decent addition for Rodgers although as I write, I hear that Barcelona are in talks with Bayern Munich for a swap deal involving Toni Kroos for the player according to the Express. Time will tell but I won’t lose any sleep over this one. As good as he’s been in the World Cup, there’s always a risk. I can’t see ex-Liverpool defender Phil Babb disagreeing with that and he’d be best qualified to talk on the matter. BS Rating – 4 A bit of a stinker that one. I don’t think this is likely. The man is going to Bavaria.

So that’s my Fantastic Four update for this week. Some good additions possibly (Shaqiri) and one which is overpriced and a tad suspect to say the least (Lallana). That said one can’t escape the fact that the latter is a good footballer – if you leave the cash aside. Difficult to do, I know but let’s think of it in “footballing terms”… whatever that means.

Personally I think there is good news and bad news. Good from the side of Suarez’s likely departure. He’s a good striker but a complete knob to go with it and I think it’s time that Rodgers got rid before the lad does some real damage to someone. Bad news is that there’s no sign of defensive cover, and if the club sells a 30 goal-a-season striker, it doesn’t bode well for the club with a defence that conceded 50 goals, and needs shoring up more than the hole in dear little Liza’s bucket. Does it need a kid’s nursery rhyme to work that out?