Manchester United Star Named in FIFA Team of the Year 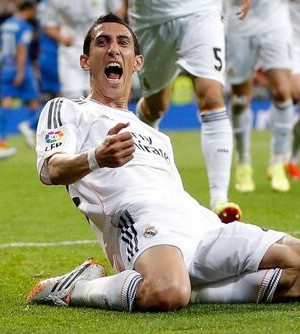 Manchester United midfielder Ángel Di María has been named in the 2014 FIFA Team of the Year, or FIFPro World XI as it’s known.

The Argentine international was key in Real Madrid’s 2014 UEFA Champions League success, performed well in the league and then at the 2014 FIFA World Cup before picking up an injury in the quarter-final that ruled him out for the rest of the tournament.

Ángel Di María has performed very well to start his Manchester United career following his £59.7 million move from La Liga in the summer, despite being somewhat disrupted by injuries.

The 2014 FIFPro World XI is as confirmed:

Yes, David Luiz really did make the team.  For the record, Thiago Silva did not play in Brazil’s 7-1 hammering by Germany in the World Cup semi-final – he was suspended.  The Paris Saint-Germain defender did return for the 3-0 thrashing by the Netherlands in the 3rd/4th place playoff however.

Andrés Iniesta is a little bit of a surprise but he’s still performed highly over the past 12 months.

Interestingly, there were no players selected from La Liga champions and Champions League runners-up Atlético Madrid