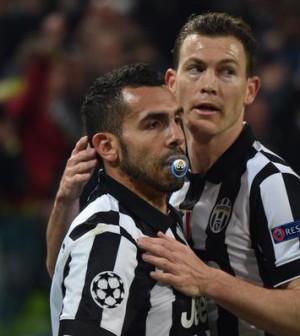 The tie is well-balanced for the return leg at Signal Iduna Park in three weeks’ time with the German Bundesliga side coming into form domestically.

Marco Reus had equalised for the visitors before Álvaro Morata scored just before half-time to give the Italian Serie A champions the lead going into the second leg.

“It gives me pleasure to say I’ve played with Pirlo.”

But when asked who the best passer of the ball he has played with, he replied with a Manchester United legend:

He is currently in his second season with the defending Serie A champions and current league leaders where he has scored 33 goals in 56 league appearances.

Carlos Tevez: “It gives me pleasure to say I’ve played with Pirlo.” Then asked who is best passer he’s played with: “Paul Scholes.” #MUFC