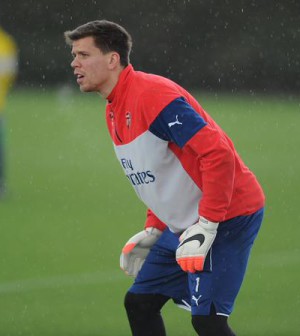 Arsenal take on the Championship side at Wembley Stadium on Saturday evening for a place in the final where the winner is set to meet either Liverpool or Aston Villa.

Szczęsny was axed from the first team after his horror show in the Gunners’ 2-0 defeat to Southampton back in early January when his mistakes led to both goals at the St Mary’s Stadium.

The Polish international has since been replaced by David Ospina, which has coincided with Arsenal’s amazing turn in form, winning 19 of the 21 games in all competitions that the Colombian has started.

Wojciech Szczęsny has been relegated to the substitute’s bench, making only three appearances since the Southampton defeat – these all coming in the FA Cup games against Brighton, Middlesbrough and the quarter-final victory over Manchester United.

Speaking at his pre-match press conference this morning, Gunners boss Wenger confirmed that he will continue to play his out-of-favour goalkeeper in the FA Cup meaning that Szczęsny will start in goal against Reading this weekend.

Wenger on @13Szczesny13: “He will play on Saturday. He had a very good performance at Manchester United.” #RFCvAFC pic.twitter.com/JRBvuyCMHr