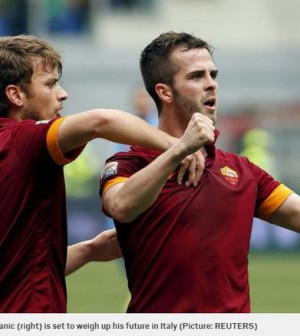 Manchester United and Liverpool target Miralem Pjanić is set to sit down with AS Roma chiefs next week to discuss his future in the Italian capital, according to reports.

The Premier League giants are both interested in the Bosnia and Herzegovina international who could be after a move away after four seasons with Roma who have not made a dent in Juventus’ Serie A title bid once again this season, and were eliminated at the group stage of this season’s UEFA Champions League.

Pjanić is a highly-rated midfielder who has been involved in at least 10 goals for the third time in four seasons having scored four and assisted six in his 27 appearances (23 starts) for Rudi García’s side so far this season.

The 25-year old is currently tied down to a contract until 2018 meaning he would not come cheap.  Roma have previously quoted €100 million for another Manchester United target, Kevin Strootman, so fans of either of these Premier League sides should not get their hopes up just yet.

Miralem Pjanić plays in central midfield and is a playmaker good at striking free kicks.  Many would expect Liverpool to see him as Steven Gerrard’s replacement, whilst he’d be competing with Ander Herrera for a place in United’s current starting lineup.