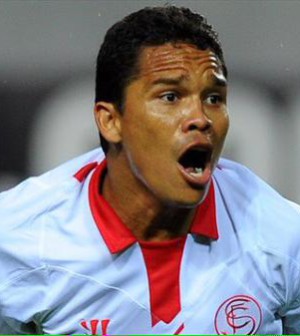 Reports over the past week suggested that Liverpool were set to battle it out with Manchester United for the signature of Sevilla striker Carlos Bacca.

However, breaking news this evening states that AC Milan have fought off competition from the two English giants to land the Colombian hitman.

Both Gazzetta dello Sport and Sky Italia are reporting that the Italian giants have landed the South American the same day that Jackson Martínez announced he is joining Atlético Madrid, and both after their nation was eliminated from the Copa América at the hands of Argentina last night.

These two Italian sources are usually dependable for transfer news, so after they have both confirms that AC Milan have come to an agreement with both the Spanish La Liga side and the player, we are fairly confident that the deal will go through.

They report that Bacca will sign a four-year deal at the San Siro – a huge coup for the giants of Europe who have slipped to more-of-less mid-table mediocrity over the past couple of seasons.

AC Milan are expected to pay €30 million (£21.3m) for the 28-year-old who scored 20 La Liga goals last season in helping Sevilla to a fifth-place finish and seven goals in the UEFA Europa League, including a brace in the final in which they beat Zenit St. Petersburg 3-2.

This is another target that Liverpool have failed to land over the past 12 months but Brendan Rodgers remains busy in the transfer window having already landed five players this summer.

The Reds are also expected to sign Nathaniel Clyne from Southampton this summer, with reports yesterday stating that the Saints had accepted a £12.5 million offer from the Merseyside club.

Carlos Bacca has proven to be an excellent striker over the past three-and-a-half years and it’s disappointing from a Premier League perspective that the player has seemingly chosen Italy over a move to England.