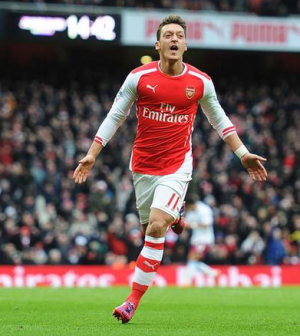 Juventus are preparing a bid for Arsenal playmaker Mesut Özil, according to reports in Italy.

Italian newspaper Tuttosport suggest that the Serie A champions will try to purchase the Arsenal star to move to Italy either this summer or in 2016.

Özil is on the front page of the Italian newspaper today with it being reported that the Old Lady will make a bid of €40 million (£29m) for the 2014 World Cup winner, should either Paul Pogba or Arturo Vidal depart the Juventus Stadium this summer.

Whether Arsène Wenger would consider selling the German international for £13 million less than he paid Real Madrid two years ago for his playmaker is certainly questionable, especially considering the money Juventus could expect to receive for either Pogba or Vidal.

Mesut Özil has had two inconsistent seasons at the Emirates – a fixture of brilliance, laziness and quiet matches has been the story so far in north London.  He even had a sub-par World Cup in which he 10 teammates helped Germany win their fourth tournament last summer in Brazil.  Notably, he missed a one-on-one late on versus Brazil that could have made it 8-0 before the Brazilians scored on the counter-attack.

With Arsenal looking to build a title-winning squad this summer, already landing Petr Čech as an upgrade in goal, CSAR certainly doesn’t expect Wenger to be cashing in on any of his first-team stars.

Tuttosports’ angle on this story though is that they claim Özil and Wenger don’t see eye-to-eye, but CSAR are unable to confirm whether this is the case or not.