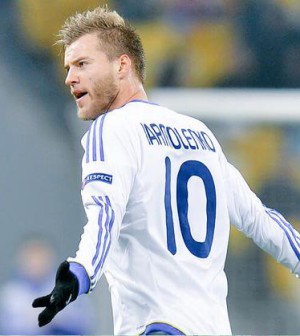 Liverpool are to match Andriy Yarmolenko’s buy-out clause with a £14.5 million bid for the Dynamo Kiev winger, according to the Express.

The Reds want to act swiftly after the newspaper reports that Arsenal have held talks with the Ukraine international.

Yarmolenko has been linked with a move to the Premier League for a while and speculation has increased once again this summer after another impressive season in the Ukrainian Premier League.

European giants Barcelona and Borussia Dortmund have even been linked with the 25-year-old recently while the Express reported over the weekend that Arsène Wenger has already made contact with Yarmolenko’s camp to discuss a potential move to Arsenal.

However, the Gunners are set to face some stiff competition for the player’s signature as the newspaper also reports that Liverpool are ready to respond to their Premier League rivals’ interest by triggering the forward’s buy-out clause with a £14.5 million bid.

Brendan Rodgers has already been very busy during this summer transfer window and if these reports are accurate then it looks like the Northern Irish manager is keen to strengthen his attacking options even further before the window closes in less than 11 hours’ time.

We shall have to wait and see how much truth there is to these rumours but Yarmolenko would be an excellent addition for for either Arsenal or Liverpool, or any other club if they are able to lure him away from Kiev today.

The Ukraine international is predominantly a left forward but can play anywhere across the front three.  He scored 19 goals and recorded a stunning 21 assists in his 43 appearances in all competitions for Dynamo Kiev last season.