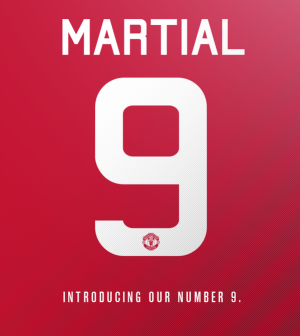 The 19-year-old arrived from AS Monaco where he only has one full season of experience under his belt.

United boss Louis van Gaal had confirmed earlier this summer that his side would make a ‘shock’ signing and this can certainly be considered just that.

Whilst the teenager is highly-rated, his nine goals in 35 French Ligue 1 matches last season makes one wonder where they huge transfer sum came from.

Martial has bags of pace and can play both as the central striker and on the left wing.

It will be interesting to see how long Wayne Rooney will maintain his role as United’s striker following this arrival.  The United captain has failed to score in his four Premier League matches in that position so far this season.

Anthony Martial is good at running at defenders with the ball and is a decent finisher despite his goal ratio.  He’ll win Manchester United lots of free kicks when he’s on the pitch this season but his defensive contribution leaves something to desire in comparison to Rooney.