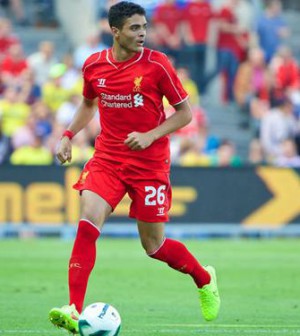 Liverpool have agreed to send young Portuguese defender Tiago Illori on loan to Aston Villa for the 2015-16 Premier League season.

The 22-year-old has not had any first-team opportunities at Anfield since joining from Sporting Club of Portugal two years ago, spending time on loan at Spanish La Liga side Granada and then French Ligue 1 side Bordeaux during his wait.

Illori is a Portugal under-21 international who possesses good pace.  He scored a stunning 35-yard goal in pre-season during Liverpool’s trip to Asia earlier this summer.

Brendan Rodgers obviously felt that the Portuguese youngster was not going to be able to compete with the likes of Martin Škrtel, Dejan Lovren and Mamadou Sakho again this season but felt it was crucial that he gets some Premier League experience under his belt as part of his development this season.

The 6’3″ centre-back will now compete with the likes of Micah Richards, Ciaran Clark, Jores Okore and Philippe Senderos for a place in Tim Sherwood’s lineup.  Aston Villa have picked up four points from their opening four matches and have not kept a clean sheet since their 1-0 win at Bournemouth on the opening day of the season.

It was reported earlier in the day that Illori had rejected a loan move to Sunderland this season.