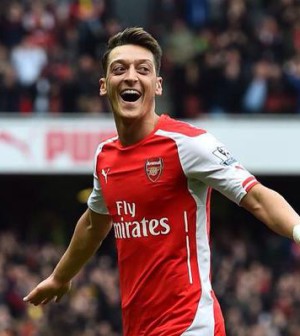 The Gunners were surprisingly beaten 0-2 at home by West Ham in their opening game before being held 0-0 by Liverpool at the Emirates.  Six points from a possible six on the road has helped them but fans will be demanding a victory over Stoke City on Saturday.

Mark Hughes’ side have picked up only two points from their opening four games but both have come on the road – at Tottenham Hotspur and Norwich City.  They are without a clean sheet since selling Asmir Begović to Chelsea in the summer.

Here is the team we expect Arsène Wenger to name:

Goalkeeper: Petr Čech
Back-to-back clean sheets has Petr Čech’s career up-and-running at Arsenal; first a top drawer performance versus Liverpool before a quieter time in a 1-0 win at Newcastle before the international break.

Defence: Héctor Bellerín, Per Mertesacker, Laurent Koscielny, Nacho Monreal
Per Mertesacker missed the last two games before the international break through illness.  Gabriel Paulista stepped in and the Gunners kept clean sheets in both games, so it will be interesting to see if the German international will go straight back into Wenger’s lineup this weekend.  The remaining three defenders are certainly first-choice for the Arsenal boss this season.

Midfield: Francis Coquelin, Santi Cazorla, Aaron Ramsey, Mesut Özil, Alexis Sánchez
The biggest question will be who starts on the right for Arsenal this weekend.  Wenger is liking Aaron Ramsey in that role but Alex Oxlade-Chamberlain cannot be forgotten.  Chile’s only game during the international break was a home friendly on Saturday so Alexis Sánchez shouldn’t be fatigued as South Americans sometimes are after playing two games many miles away.  The Arsenal star has yet to find his top form to start the new season however, but could matchup against Glen Johnson this weekend and that would be very favourable for him.  The home fans should expect Mesut Özil and Santi Cazorla to run the game in the middle of the park with Stoke City seemingly not replacing Steven N’Zonzi so far this season.

Striker: Olivier Giroud
The pace of Theo Walcott could certainly be a good option to Arsène Wenger versus Philipp Wollscheid and Geoff Cameron but Olivier Giroud seems to be in the manager’s good books at the moment.  Don’t be surprised if both strikers make an appearance in this match though.  Ryan Shawcross’ absence has been a big miss for Stoke so far this season and the club captain remains absent for this weekend’s game.

Here’s how Arsenal look on paper: 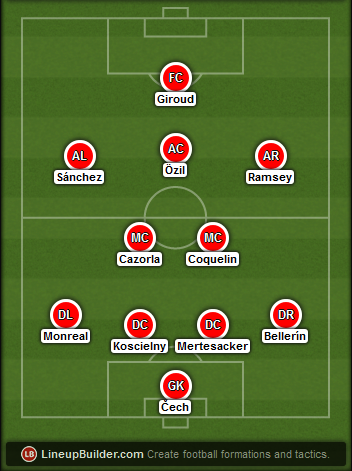