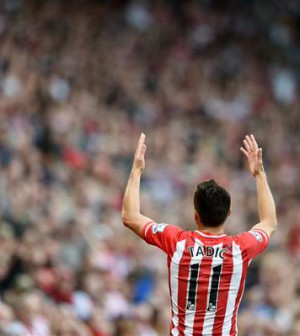 Southampton ended September with their only Premier League win of the month as they ran out 3-1 winners over Swansea City with a largely new defence.

Ryan Bertrand made his first appearance of the season as he returned from injury, playing alongside Virgil van Dijk who made only his third league appearance since joining from Celtic.

The Saints have every reason to go into this match with confidence as Chelsea have taken only eight points from their first seven fixtures this season, and losing in their UEFA Champions League tie at FC Porto on Tuesday night.  Southampton drew both fixtures 1-1 versus the Premier League champions last season.

Here is the XI I think Ronald Koeman will name at Stamford Bridge:

Goalkeeper: Maarten Stekelenburg
Two games without a clean sheet now since keeping three in a row – Chelsea haven’t been the most productive in front of goal this season and they will certainly miss the firepower of the suspended Diego Costa.

Defence: Cédric Soares, José Fonte, Virgil van Dijk, Ryan Bertrand
Former Chelsea full-back Ryan Bertrand is set to make his second start of the season, whilst Cédric Soares returned to face Swansea after a one-game absence.  The Saints have kept one clean sheet in three games with Virgil van Dijk in the side as he looks to form a partnership with José Fonte in the middle.

Midfield: James Ward-Prowse, Victor Wanyama, Sadio Mané, Steven Davis, Dušan Tadić
James Ward-Prowse played alongside Victory Wanyama last week – it will be interesting to see if Koeman sticks with him versus a top side or whether former Blues midfield Oriol Romeu steps in.  The Spaniard’s positioning has been poor in his early matches.  Southampton have great threats down the wings, and both of them, Sadio Mané and Dušan Tadić like to cut inside too.  Mané has real pace to trouble the Chelsea defence, whilst Tadić’s playmaking skills will likely get the better of an out-of-form Branislav Ivanović.

Striker: Graziano Pellè
Southampton’s target man up front could potentially see John Terry recalled to the Chelsea starting lineup.  Graziano Pellè doesn’t have the best record in away matches but with Chelsea conceding 2+ goals in six of their seven league matches this season the Italian has to fancy his chances.

Here’s the Southampton team on paper: 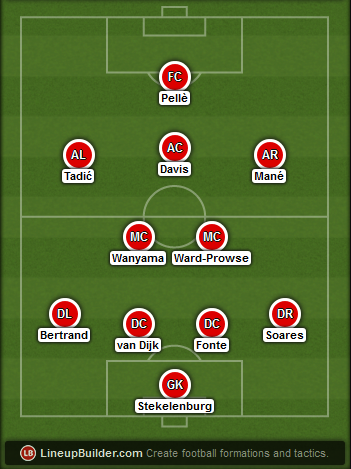