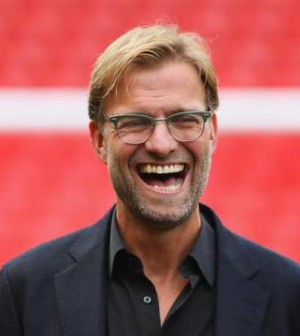 Jürgen Klopp will make his debut as Liverpool manager in this weekend’s opening match as his new side face Tottenham Hotspur at White Hart Lane.

The hosts are unbeaten in their last seven games since losing to Manchester United in their season opener, whilst Liverpool have won their last five matches versus Spurs.

Liverpool have been dealt a blow over the international break with both Danny Ings and Joe Gomez both picking up season-ending injuries.

Here is the first XI we predict Jürgen Klopp will name as Liverpool manager:

Goalkeeper: Simon Mignolet
The Belgian goalkeeper kept clean sheets in each of his first three games this season but has gone five without one since.  Klopp had a great defensive record for two seasons at Borussia Dortmund when they won the German Bundesliga title despite having a below par goalkeeper in Roman Weidenfeller.  He’s got an upgrade at Anfield in Simon Mignolet.

Defence: Nathaniel Clyne, Martin Škrtel, Mamadou Sakho, Alberto Moreno
Alberto Moreno had replaced Joe Gomez at left-back before the youngster’s injury, whilst Mamadou Sakho should continue alongside Martin Škrtel as Dejan Lovren is not expected to be fit.  Klopp played a 4-2-3-1 formation in Germany and we expect him to stick with that in the Premier League too.

Midfield: Lucas, Emre Can, James Milner, Philippe Coutinho, Adam Lallana
With Jordan Henderson still out injured, Lucas and Emre Can should sit in front of the back four.  Can will be the player of these two pushing forward more often to support attacks around the penalty area.  With Roberto Firmino injured, James Milner should line up on the right.  His leadership on the pitch should guarantee him a start, whilst Jordon Ibe and Adam Lallana are both options down this flank.  Lallana may start on the left with Philippe Coutinho playing the Henrikh Mkhitaryan role behind the striker.

Striker: Daniel Sturridge
Christian Benteke and Danny Ings’ injuries mean Jürgen Klopp has not other choice but to start Daniel Sturridge up front this weekend.  It will be interesting to see what the manager goes with when both Benteke and Sturridge are both fit, with the latter capable of playing on the right wing as Patrick Aubameyang was once deployed at Dortmund.

Liverpool fans – are you optimistic for both this weekend and the future under Jürgen Klopp?