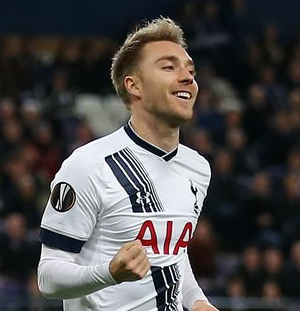 Tottenham head into this weekend’s North London derby with the current longest unbeaten run in the Premier League, having not lost since the opening day of the season.

Mauricio Pochettino’s side also have a much better bill of health in comparison to their local rivals who have been decimated in midweek over the past couple of weeks.

Arsenal head into this match off the back of a 5-1 hammering to Bayern Munich in the UEFA Champions League, but in good form domestically and starting the weekend joint-top of the table.

Here’s who I think Pochettino will send out to knock Arsenal off the top of the table:

Goalkeeper: Hugo Lloris
Only Arsenal and Manchester United have a better defensive record than Tottenham after 11 games.  Hugo Lloris is getting more protection from his defence than his was last season and Mauricio Pochettino’s training during the off-season appears to have paid off.

Defence: Kyle Walker, Toby Alderweireld, Jan Vertonghen, Danny Rose
The partnership of Jan Vertonghen and Toby Alderweireld is working very well in the centre of Tottenham’s defence with only Stoke City and Swansea City scoring more than one goal against them in their opening 11 Premier League games.  You often think they will be susceptible to attacks down the wings though with Danny Rose and Kyle Walker at full-back.  Alexis Sánchez and Joel Campbell are expected to play out wide for Arsenal.  With Campbell’s poor defensive displays versus Swansea and Bayern Munich, Rose should fancy his chances when going forward.

Midfield: Dele Alli, Eric Dier, Érik Lamela, Mousa Dembélé, Christian Eriksen
Eric Dier got handed an England call-up yesterday, whilst Dele Alli has been one of the breakthrough stars so far this season.  These two will have a busy game with Mesut Özil and Santi Cazorla looking to control the possession in the midfield for the hosts.  Christian Eriksen will be looking to have success against Mathieu Debuchy down the left.  The Dane starts there with Nacer Chadli currently sidelined.  Mousa Dembélé has been playing well in midfield.

Striker: Harry Kane
The England international has found some form of late; a hat-trick versus Bournemouth followed up by a stoppage time goal in the 3-1 victory over Aston Villa on the counter attack on Monday night.  He’ll need to be at his best to score in this one with Laurent Koscielny and Per Mertesacker forming a formidable partnership.

Here’s how Tottenham line up: 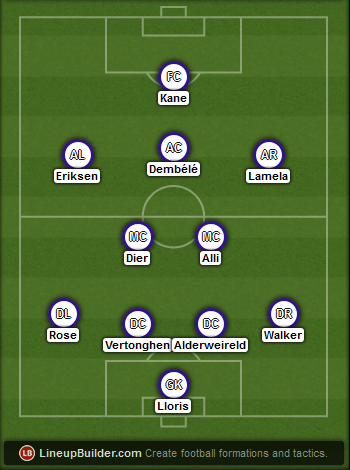 Tottenham fans – what changes would you make to this lineup?