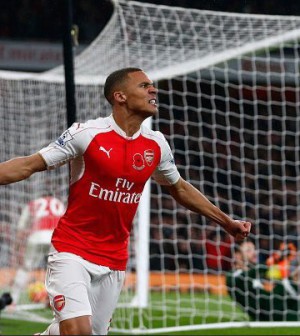 Kieran Gibbs proved to be a surprise hero for Arsenal as he rescued the home side a point in the first North London derby of 2015-16 in a game that Tottenham Hotspur had dominated for 75 minutes.

Harry Kane had opened the scoring for Tottenham who were well on top in the first half.  The England international latched onto a through ball from the half-way line by Danny Rose to beat Petr Čech one-on-one after poor positional play from Laurent Koscielny.

Tottenham will be kicking themselves for not turning their domination and chances into a second goal as substitute Gibbs eqaulised from close range in the final quarter-of-an-hour following a delicious cross from Mesut Özil.

Petr Čech 7 – Unlucky with the goal bouncing over his outstretched leg.  Had one nervy moment in the second half but did make a couple of saves to keep his side in the game before they snatched a point.

Mathieu Debuchy 7 – Faced a lot of threat at right-back from Christian Eriksen and Danny Rose pushing on down that side but largely did well making a number of successful tackles.  Not at fault for the goal.

Per Mertesacker 5 – Tough game at centre-back as Harry Kane and co caused a lot of problems to the Arsenal defence for 75 minutes.

Nacho Monreal 7 – A couple of shaky moments but generally Tottenham didn’t cause too many problems to the Spanish left-back.

Santi Cazorla 4 – Was out-muscled and ineffective in the first half as Tottenham’s midfield dominated and passed the ball around Arsenal’s midfield which left a lot of gaps.  Replaced by Mathieu Flamini at half-time.

Francis Coquelin 6 – Seemingly unable to do anything in the first half as Tottenham dominated the game in the middle of the pitch but a much better performance after half-time when Mathieu Flamini came on to play alongside him.

Mesut Özil 7 – Excellent deliveries of set pieces gave Arsenal chance after chance today, including the cross from the right in open play that gifted Kieran Gibbs Arsenal’s equaliser.  Lazy off the ball, especially in the second half.

Alexis Sánchez 6 – Hardworking game but couldn’t get anything going in attack down the left.

Olivier Giroud 6 – Got the better of both centre-backs in the air but only forced one save out of Hugo Lloris.  Also hit the crossbar when he perhaps should have done better.

Mathieu Flamini (45 mins) 6 – Arsenal defended better in the second half as their midfield was much tighter when Mathieu Flamini gave them more energy after replacing Santi Cazorla at he break.

Kieran Gibbs (17 mins) n/a – Supersub Kieran Gibbs rescued a point with an equaliser at the back post.  His pace looked to be a late threat for the visitors and the game was turned on his head at 1-1.

Mikel Arteta (16 mins) n/a – Brought on to protect the draw in the final quarter-of-an-hour but his side actually ended the game well on top and the more-likely winner following their equaliser.

Hugo Lloris 5 – Dealt with a couple of set pieces poorly, staying on his line when he could have come out.  Fell down for Kieran Gibbs’ equaliser when he would likely have been able to save it if he had stayed on his feet.

Kyle Walker 7 – Substitute Kieran Gibbs equalised against the run of play by getting in beyond Kyle Walker at the back post.  Largely dealt with Alexis Sánchez though.

Toby Alderweireld 7 – Denied by a good save from Petr Čech midway through the second half.  The Tottenham centre-backs really struggled to deal with crosses and set pieces today.

Jan Vertonghen 7 – Won the ball back a few times to clear most danger on the Tottenham goal but the defence really struggled with set pieces and crosses in this game.  Olivier Giroud caused the Spurs defence some problems.

Danny Rose 7 – Solid performance defensively and offered a good threat down the left.  Excellent pass to play Harry Kane in for the opening goal.  Arsenal’s equaliser did come from a cross down his wing though.

Dele Alli 9 – Another solid performance in midfield, especially in the first half as Tottenham dominated.

Eric Dier 6 – Tottenham were on top for a lot of the game but Eric Dier wasn’t a huge part of that and was fortunate not to receive a yellow card for a cynical shirt tug in the second half.

Christian Eriksen 7 – Forced a good save at 1-0 and created a few chances for his side.  Poor crossing today though.

Mousa Dembélé 8 – Strong in the first half and was a key part of Tottenham’s dominance for the first 75 minutes, winning a number of challenges and looking after the ball when in possession.

Érik Lamela 8 – An excellent hardworking performance off the ball, winning it back a number of times for his side and putting the Arsenal defenders under pressure.  Did take a gamble with two slide tackles in the second half when already on a yellow card befoRE mauricio Pochettino replaced him for Heung-Min Son in the final quarter-of-an-hour.

Harry Kane 8 – Good work up front before opening the score with a one-on-one finish.  Got himself in a couple of other goalscoring positions but wasn’t unable to add a second.

Heung-Min Son (16 mins) n/a – Replaced Érik Lamela to make sure Tottenham ended the game with 11 men.  Afterwards Tottenham failed to cause much threat after dominating the opening 75 minutes.

Ryan Mason (9 mins) n/a – Brought on late to give Tottenham more energy as they ended up hanging on for a point.