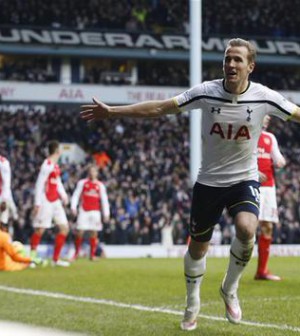 In the process, Spurs would set a new club record in the Premier League by going 13 games unbeaten having not lost since the opening day of the season.

Mauricio Pochettino’s side are at a slight disadvantage in that they were playing a UEFA Europa League match in Azerbaijan on Thursday night.  The manager even named a strong lineup.  Chelsea’s Champions League match in Israel was nearly 48 hours before.

Here is the Tottenham team I think we’ll see on Sunday:

Goalkeeper: Hugo Lloris
Tottenham have conceded exactly one goal in each of their last four Premier League games and have only kept one clean sheet in their last seven.  That came at home to Liverpool.  In Hugo Lloris they have a dependable goalkeeper but it’s difficult to predict how busy he will be on Sunday because Chelsea haven’t exactly been the most efficient up front, even though they have the stars.

Defence: Kyle Walker, Toby Alderweireld, Jan Vertonghen, Danny Rose
Eden Hazard hasn’t done too much this season but Chelsea fans may fancy their left winger to get the better of Kyle Walker.  The centre-back partnership is proving good for Tottenham and they’re in for an interesting battle against Diego Costa.  The Spaniard hasn’t had the best of seasons so the Belgian pair should be able to frustrate the Chelsea striker.

Midfield: Eric Dier, Ryan Mason, Heung-Min Son, Mousa Dembélé, Christian Eriksen
Dele Alli is suspended; a big blow for Tottenham with his energy and performances in that Tottenham midfield.  Ryan Mason was the Englishman that got a lot of media attention last season, I think we’ll see him partnering Eric Dier.  Érik Lamela remains a doubt so Heung-Min Son should keep his place in the starting lineup.  He’ll play down the right and Christian Eriksen down the left trying to create chances for the home side.  With Eden Hazard not being big on his defensive work and Branislav Ivanović not being good at it, Spurs could see some real good success out wide.

Striker: Harry Kane
Seven goals in his last four matches and the winner midweek, Harry Kane has found his form again.  He scored two goals in this fixture last season including the cracking opener which turned the match on its head.  With Chelsea performing so poor at the back this season and John Terry absent, don’t be surprised to see the Tottenham striker on the scoresheet again this weekend.  He has 10 goals in 13 Premier League London derbies.

Here is the Tottenham team that I’m confident will start versus Chelsea: 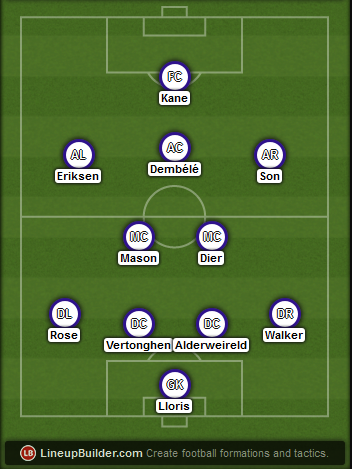