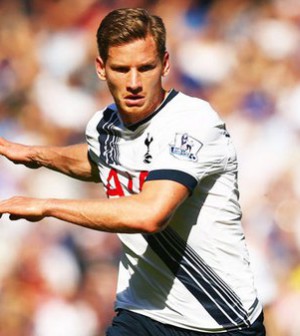 After a thrilling 5-3 in this fixture back on New Year’s Day, BT’s hype for this afternoon’s game at White Hart Lane ended in a dull 0-0 draw between Tottenham Hotspur and Chelsea.

Hugo Lloris 7 – Forced into a top drawer save to deny Eden Hazard midway through the second half but otherwise was hardly tested.

Kyle Walker 7 – Pedro wasn’t greatly involved in attack for Chelsea as Kyle Walker kept him quiet.   Failed to cut out a long ball that allowed Hazard to fire a volley in on goal.  The Tottenham right-back made a couple of runs forward.

Toby Alderweireld 8 – The Tottenham defence kept Chelsea at bay for most of the game.  There was a moment of miscommunication between them that nearly sent Eden Hazard away but otherwise they had the defending champions under control.

Jan Vertonghen 9 – Made two last man interceptions to prevent Chelsea getting in on Hugo Lloris’ goal and the Belgian centre-back largely prevented the visitors for having many chances at all on goal.

Danny Rose 6 – Picked up a stupid yellow card for a hack on Hazard in the corner.  Willian was arguably Chelsea’s best midfielder, down the right wing, up against Danny Rose.

Eric Dier 8 – Chelsea didn’t offer much through the middle, Oscar was kept quiet by the holding midfield pair.

Ryan Mason 7 – Hadn’t allowed Chelsea much down the centre of the pitch and did bring the ball forward on a couple of occasions before going off with an ankle injury before the hour.

Heung-min Son 7 – Put a free header straight at Asmir Begović in the first half following an excellent Harry Kane cross.  Was a decent threat down the right but nothing special.

Mousa Dembélé 8 – Solid in midfield, first in a central attacking role before playing in front of the back four following an injury to Mason.  Got stuck in, won the ball back for his side a number of times and did have a few runs at the Chelsea midfield.

Christian Eriksen 7 – Saw a lot of the ball but didn’t cause too much of a threat.  It was a game of few chances that missed a moment of a magic from someone like Christian Eriksen whom we all know is capable of it.

Érik Lamela (35 mins) n/a – Mauricio Pochettino was forced to change his team a bit through an injury to Ryan Mason.  The Argentine didn’t make much of an impact.

Clinton N’Jie (16 mins) n/a – Brought on as a late counter-attack threat but never got an opportunity as he saw minimal of the ball.

Asmir Begović 6 – Quiet game for the Chelsea goalkeeper as Chelsea kept their first clean sheet in an away Premier League game this season.

Branislav Ivanović 7 – A rare comfortable game this season for the Chelsea right-back.

Kurt Zouma 8 – The Chelsea defence kept Harry Kane under control today after the Tottenham striker had scored a brace in this fixture last season.

Gary Cahill 8 – A fine game for Gary Cahill today who was in for the injured John Terry.

César Azpilicueta 7 – Heung-min Son was able to get a couple of shots in goal from this side of the field but otherwise there wasn’t too much threat against the Chelsea defence.

Cesc Fàbregas 5 – Passing was a bit off colour again today from Cesc Fàbregas who did support the attacks but didn’t cause any threats to the home side’s defence.

Nemanja Matić 7 – Solid game from the Serbian in protecting his back four.

Willian 7 – One of Chelsea’s best attacking players this afternoon but even then Willian wasn’t involved in testing Hugo Lloris.  Did a lot of work defensively too.

Oscar 5 – Very quiet game from the Chelsea number 10 who was poor in the final third and largely un-involved.

Pedro 5 – Quiet game down the left from Pedro.  Fired a short narrowly over in the first half but otherwise didn’t get involved much.

Eden Hazard 8 – One player in this game who looked like they may have the quality to break the deadlock was Eden Hazard who was playing the lone striker role today.  Was hacked down on a couple of occasions but also forced a good save out of Hugo Lloris in the second half.

Ruben Loftus-Cheek (1 min) n/a – Brought on in stoppage time to get an appearance next to his name,