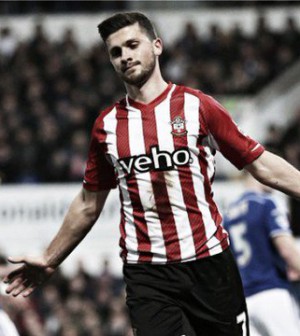 Southampton will be looking to make it three wins in a row versus Arsenal when the Saints travel to the Emirates this evening.

Ronald Koeman’s side were stunning 4-0 winners at St Mary’s when these two sides met on Boxing Day.

Arsenal were 1-0 winners in this fixture last season before losing 2-0 on the south coast on New Year’s Day 2015.

Southampton head to North London this evening having won each of their last three games to nil – beating Watford 2-0, West Brom 3-0 and winning 1-0 at Manchester United last time out.

The Gunners were 2-1 winners at home to Burnley in the FA Cup on Saturday but manager Arsène Wenger did rotate a number of his regulars.  Southampton have not played in over a week.

Here is the Southampton team I think we’ll see at the Emirates:

Goalkeeper: Fraser Forster
The England international has made a great return from injury to win and keep clean sheets in all three games he has played this season.  Fraser Forster has largely been well-protected by his back four and not called into a great deal of action during his 270 minutes of Premier League action this season.

Defence: Cédric Soares, José Fonte, Virgil van Dijk, Ryan Bertrand
Cuco Martina opened the scoring on Boxing Day with a stunner but Cédric Soares should retain his place at right-back for this one.  This back four has started each of the past three games, keeping a clean sheet in each, so I don’t see Koeman changing it.

Midfield: Victor Wanyama, Jordy Clasie, Sadio Mané, Dušan Tadić, Matthew Targett
Jordy Clasie had an excellent hour or so versus Arsenal in the first meeting and has been very good for Southampton when fit this season.  Expect him to start this one alongside Victor Wanyama.  Matthew Targett has played each of the last three on the left wing successfully and adds good protection to Ryan Bertrand to defending against Theo Walcott and Héctor Bellerín down that side.  The creativity and goal threat from midfield will come from Dušan Tadić and Sadio Mané – the former capable of playing through balls from the number 10 role, whilst Mané is good at running in behind the defence.

Striker: Shane Long
Charlie Austin is coming off a goalscoring debut versus Manchester United and Graziano Pellè is due back from injury but Shane Long’s man of the match performance versus Arsenal last time they met must give him the nod this evening.  The striker’s pace and off-the-ball runs caused the Arsenal centre-backs endless problems at St Mary’s.  Something that neither Pellè or Austin offer as great. 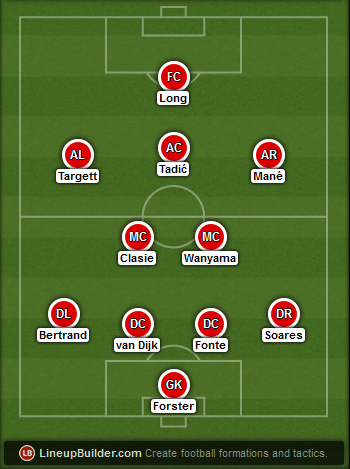