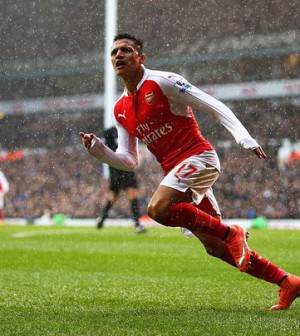 The points were shared in this afternoon’s North London derby as both Tottenham Hotspur and Arsenal failed to put any real pressure on Premier League leaders Leicester City at White Hart Lane this afternoon.

Aaron Ramsey had given the Gunners a half-time lead with a cheeky flick to open the scoring.

A stupid lunge on Harry Kane down the touchline saw Francis Coquelin receive his second yellow card less than 10 minutes into the second half when there was no danger nor need to dive in.

Tottenham quickly took advantage of the extra man as Toby Alderweireld tucked home nicely after Arsenal failed to pick up he and Érik Lamela from a corner.

Two minutes later and Mauricio Pochettino’s side went ahead thanks to a fantastic strike from Harry Kane.

Spurs failed to hold onto their lead as Alexis Sánchez earned Arsène Wenger’s a point late on.

Hugo Lloris 5 – Failed to keep either of Arsenal’s goals out despite getting a hand onto them.  Hugo Lloris may feel he let his side down today.

Toby Alderweireld 7 – Fine finish to equalise for Tottenham on the hour.  Danny Welbeck and the Arsenal attack didn’t see too many sights on goal but those they did they weren’t marked very well.  Toby Alderweireld couldn’t get close enough to Alexis Sánchez Arsenal’s equaliser.

Kevin Wimmer 6 – Tottenham’s defence were opened up too easily for both goals.

Danny Rose 7 – Very good attacking threat and did find space down the left as Aaron Ramsey was often too narrow for the Gunners.  Put plenty of balls into the box.  One error was not getting close enough in allowing Héctor Bellerín time and space to pick out Alexis Sánchez for Arsenal’s equaliser.

Eric Dier 7 – Lucky to remain on the field in the final 15 minutes after avoiding a certain second yellow card for a shirt tuhg on Olivier Giroud on the halfway line.  Referee Michael Oliver gave the free kick but kept his cards in his pickets.  Otherwise a solid game in breaking up Arsenal’s attacks and keeping Mesut Özil anonymous.

Mousa Dembélé 8 – Run the midfield, particularly in the second half in winning the ball, bringing it forward and looking after it.  Arsenal didn’t see much of the ball after the break and Mousa Dembélé was a big part of that.

Érik Lamela 7 – Worked hard off the ball in closing down and tackling the opposition.  Was the only Spurs player to test David Ospina in the first half.  Came even closer shortly after half-time before being sacrificed as Pochettino wanted to protect his defence some more at 2-1.

Dele Alli 6 – Largely ineffective game, playing in the middle in the first half before Pochettino moved the youngster out of the left and Christian Eriksen into number 10 at the start of the second half.  His hard work and cheeky backheel set up Harry Kane’s goal.

Christian Eriksen 8 – Saw a lot of the ball and created his fair share of chances particularly after half-time when he moved into the number 10 role.

Harry Kane 7 – Lively game up front in which Harry Kane tested David Ospina a few times and scored a stunning goal to give Tottenham the lead shortly after Toby Alderweireld had equalised.

Ryan Mason (24 mins) n/a – Brought on to protect a 2-1 lead but it didn’t work.  Tottenham had been pushing for a third before Ryan Mason came on.

Heung-min Son (9 mins) n/a – Late substitution in hope Spurs could restore their lead but Heung-min Son barely got a touch.

David Ospina 8 – Top save to deny Érik Lamela early on and then to keep Harry Kane’s close-range effort moments after Francis Coquelin’s sending off.  Made a number of saves though did look shaky on crosses and set pieces.  David Ospina didn’t have a chance with either goal.

Héctor Bellerín 7 – Provided the through ball from which Alexis Sánchez equalised for Arsenal.  Needs practise on his crossing though.  Tough game against Christian Eriksen and Danny Rose with Aaron Ramsey giving the Spaniard little support.

Per Mertesacker 6 – Not strong enough and too casual in allowing Dele Alli to chase a lost cause and assist Harry Kane’s goal.  Better performance than some of his recent ones though.

Gabriel Paulista 7 – Looked solid in the first half but was  part of an Arsenal defence that couldn’t deal with the pressure from Tottenham after Francis Coquelin’s red card.  Showed good leadership at the back in barking out orders but still looks way short of a top four player in England.

Kieran Gibbs 6 – Had an adequate game in replacing Nacho Monreal in battling with Érik Lamela and Heung-min Son.

Mohamed Elneny 7 – Did a very good job alongside Francis Coquelin before his teammate was sent off.  Arsenal quickly fell behind after the French midfielder was dismissed however.

Aaron Ramsey 5 – Tough game on the right wing for Aaron Ramsey who was neither good in possession nor great out of it.  Often he was too narrow and not supporting Héctor Bellerín defensively.  Cheeky flick for he game’s opener goal though.

Mesut Özil 5 – Saw a lot of the ball but failed to do anything with it as it was another quiet performance from the German playmaker who has not shown up for the past four games.

Alexis Sánchez 6 – Didn’t have the most productive of games but Alexis Sánchez did pop up with Arsenal’s important equaliser in the second half.

Danny Welbeck 7 – Hardworking, always looking to get in behind the back four but just didn’t get the supply he needed.  His run arguably pulled Toby Alderweireld out of position to assist Sánchez’s equaliser.

Olivier Giroud (16 mins) n/a – Arsenal equalised almost immediately after Olivier Giroud entered the field but the French striker wasn’t involved in the goal, didn’t have a single shot and hardly got involved during his time on the pitch.

Mathieu Flamini (6 mins) n/a – Brought on so Arsenal didn’t fall behind late on with a man less.

Joel Campbell (1 min) n/a – No time for the Costa Rican to do anything.