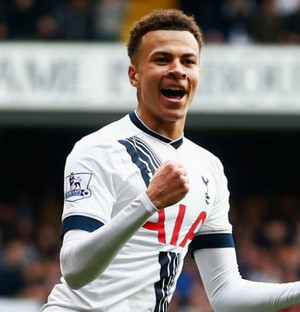 Tottenham Hotspur will have delayed Leicester City’s title celebrations until Sunday 24 April at the earliest following their 3-0 thrashing of Manchester United this afternoon.

Three goals in a space of seven minutes in the second half saw Spurs record their first home win against the Red Devils since 2001.

Dele Alli opened the scoring on 70 minutes following a wonderful cross from Christian Eriksen out on the left.  Toby Alderweireld doubled the lead four minutes later when he connected with an Érik Lamela free kick.  The Argentine put the icing on the cake when he turned home Danny Rose’s low cross.

Hugo Lloris 6 – Quiet afternoon for the Tottenham goalkeeper who was very well protected by his back four.

Kyle Walker 7 – Decent performance from the right-back who played an excellent long ball in the build up to Tottenham’s third.  Got the better of Marcos Rojo when bombing forward.

Jan Vertonghen 8 – Not tested on his return from injury in what was a comfortable afternoon for Jan Vertonghen.

Danny Rose 8 – Defended well against Juan Mata and Timothy Fosu-Mensah down the right wing and was a threat down the left in the final 20 minutes when the young United right-back went off injured.  Provided the assist for Tottenham’s third goal.

Mousa Dembélé 8 – Brought the ball forward to help create attacks in an effective performance from the central midfielder.  Spurned a great opportunity to make it 4-0 late on.

Érik Lamela 9 – Missed a great opportunity in the first half but more than made up for it in the second 45 as his free kick created Spurs’ second before he side-footed the third himself.

Dele Alli 8 – Another decent showing from the England international who celebrates his 20th birthday tomorrow after scoring the opening goal in this game.

Christian Eriksen 8 – A lively performance from the Dane who created a number of chances including the assist with an excellent first-time left-footed cross from out wide.

Harry Kane 6 – Chris Smalling got the better of the Tottenham striker today but Harry Kane did find time and space to play Erikisen in down the left which led to the opening goal.

Heung-min Son (1 min) n/a – Brought on in the final minute and didn’t have enough time to get among the goals.

Ryan Mason (1 min) n/a – Stoppage time replacement to give the Tottenham fans an opportunity to give Dele Alli a round-of-applause.

David de Gea 6 – The Manchester United goalkeeper had little chance with any of the goals but had made some good saves beforehand.

Timothy Fosu-Mensah 8 – Impressive performance from the youngster starting at right-back.  Timothy Fosu-Mensah made some promising attacking runs down the wing and two key blocks in the first half.  It was 0-0 when he went off injured two minutes before the opening goal.

Chris Smalling 5 – Kept Harry Kane quiet during the 90 minutes but couldn’t handle Spurs in the final 20 minutes when they scored at will.

Daley Blind 5 – Tough game for the Dutch centre-back this afternoon who couldn’t get close to Alli for the first goal and then gave Lamela too much time for the third goal.

Marcos Rojo 4 – Tottenham got the better of him out wide all game and Marcos Rojo didn’t even make an attempt to challenge Toby Alderweireld in the air for their second goal.

Morgan Schneiderlin 7 – A solid performance in front of the back four, handling Mousa Dembélé and Eric Dier in the centre of the park.

Michael Carrick 5 – Was overrun in the centre of the park today.

Juan Mata 4 – Quiet afternoon from the Spaniard who went missing.

Anthony Martial 6 – Looked lively up front but failed to take one good chance at 0-0 which he’d created for himself but fired straight down the middle at Hugo Lloris.

Marcus Rashford 5 – Hard working performance in the first half from the United front man but never tested Lloris and the organised Tottenham defence didn’t give the teenager anything.

Ashley Young (45 mins) 5 – Seemed a strange move to bring on Ashley Young to play up front for the second half.  He ran around but his teammates couldn’t create chance for him.

Matteo Darmian (22 mins) n/a – A woeful performance from the replacement right-back as Manchester United had gone from 0-0 to 0-3 within 10 minutes of the Italian entering the field.  The first and third goals came from crosses down Tottenham’s left where Matteo Darmian hadn’t got close enough to Christian Eriksen and Danny Rose.

Memphis Depay (14 mins) n/a – Late appearance at 0-3 but didn’t get enough touches to make an impact.