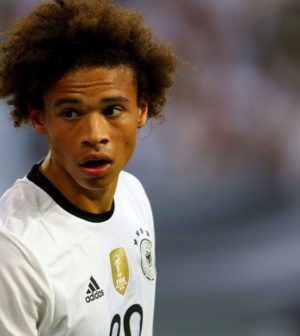 Manchester City have agreed a deal German winger Leroy Sané from Schalke 04, according to reports in Spain.

Spanish newspaper Sport are reporting that Pep Guardiola has agreed his second big summer signing as Manchester City manager.  No transfer fee has been mentioned but previous reports have suggested it will be in the region of £40 million.

Chelsea had also been linked to the exciting youngster in recent weeks.

Earlier in the year, Guardiola was quoted as saying the following about the 20-year-old:

“Leroy Sané is a great talent and I must congratulate Germany for having a player like that.”

Sané made his debut for Schalke 04 towards the end of the 2013-14 season before establishing himself this past season which included becoming one of the youngest scorers in the UEFA Champions League when he scored against Real Madrid.

The German international is currently in France as part of Joachim Löw’s squad that are expected to win Euro 2016.  Sport report that the play will not officially sign with the club until Germany are back home from the tournament.

Leroy Sané is quick and loves to run at defenders.  He often cuts inside from the right wing and has a good long range shot on him.  He scored eight goals and added a further six assists in 33 German Bundesliga appearances (23 starts) this past season.

Manchester City had Jesús Navas and Samir Nasri as their options down the right flank in 2015-16.

The Premier League side signed İlkay Gündoğan from Borussia Dortmund for £20 million this summer.  He is not part of the German Euro 2016 squad due to a back injury – the same injury that prevented him being part of the 2014 World Cup winning side.