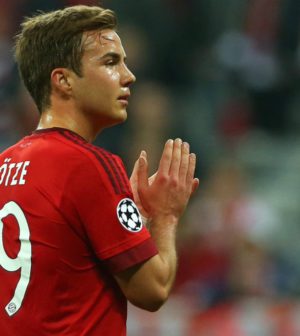 The German star has been linked with a move to Anfield for a while following Jürgen Klopp’s appointment last October.

Götze has since confirmed his intention to leave Bayern Munich this summer, despite initially saying he planned to stay, prior to Euro 2016.

It would suggest that the 24-year-old is no longer in incoming manager, Carlo Ancelotti’s plans.

The former-Borussia Dortmund was in and out of the Bayern Munich team for three years under Pep Guardiola, starting only 11 Bundesliga games this past season.

Competing with the likes of Thomas Müller, Franck Ribéry, Arjen Robben and Kingsley Coman for regular first-team football in Munich has proven difficult for the German international.

Liverpool have previously offered the world class player an opportunity for regular first-team football under his former coach, and now Tottenham Hotspur are also in the running for Götze.

The Bild claim that Tottenham’s ability to offer Mario Götze UEFA Champions League football next season could be a factor – something their Premier League rivals Liverpool are unable to offer.

Lewis Holtby was the last German to play for the North London club, whilst Steffen Freund, Christian Ziege and Jürgen Klinsmann have also played in the Premier League for Spurs.

Liverpool currently have fellow countryman Emre Can on their books to help persuade Mario Götze in his decision, though CSAR believe that Jürgen Klopp would surely be enough.

It will be interesting to see where Mario Götze ends up this summer now that he has stated his intentions to leave the Allianz Arena.  The Premier League would certainly be honoured to have such a talent as his playing week-in, week-out.