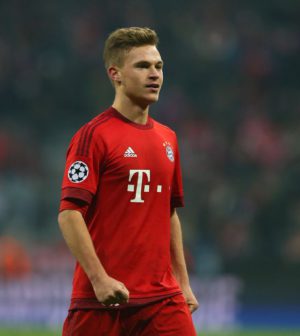 The new City boss signed Kimmich for Bayern Munich last season from then 2. Bundesliga side RB Leipzig before giving the youngster 23 league appearances (15 starts) in his debut season at the Allianz Arena.

At the end of his first Bundesliga campaign, Joshua Kimmich then became a big part of Joachim Löw’s German side who disappointed at Euro 2016 this summer.

Kimmich played as a right-back, right wingback and holding midfielder for the German head coach in France.  He also filled in at centre-back at times for Bayern Munich last season, showing his versatility.

It’s worth noting that Emanuele Giaccherini had an excellent game down the left wing versus Kimmich in Germany’s quarter-final penalty shootout victory over Italy at Euro 2016.  In the following game, Kimmich was at fault for France’s second game.  However, he managed to make the UEFA Team of the Tournament, perhaps more for his support in attack where he looked excellent versus Slovakia.

The youngster is still learning and shown huge promise after his first top flight campaign, so much so that the Daily Mail are reporting that Manchester City are considering a £20 million bid for the five-time German international.

They go on to claim that Joshua Kimmich would replace Pablo Zabaleta at right-back.

Bayern Munich splashed out £6 million for Kimmich in January 2015 when he was 19 at the time – a big sum for a youngster coming from the second tier in Germany.