Why José Mourinho Would Be Perfect for Paul Pogba 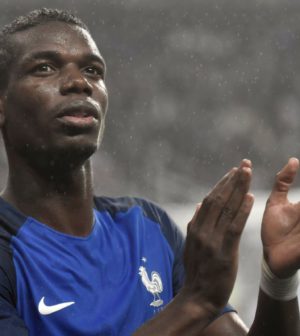 Many members of the media have questioned Manchester United’s pursuit of Paul Pogba following France’s disappointing performance in the Euro 2016 final.

Fellow countryman Emmanuel Petit went as far as saying the 23-year-old would be a ‘waste of money‘ following the 1-0 extra-time loss to Portugal.

United have been strongly linked with a record breaking £100 million offer for the Juventus star.

Prior to that Euro 2016, in which Pogba had scored in the quarter-final and was part of the France team that upset Germany 2-0 in the semis, few were flinching an eye at the price tag, excited over the prospect of the highly-rated star plying his trade in the Premier League.

So what’s happened?  The role given to him by national team manager Didier Deschamps for that final didn’t get the best out of Pogba.

Deschamps restricted his star’s movement going forward whilst Moussa Sissoko had more freedom to attack.  Paul Pogba’s frustrations were visible as the game went on.

France were too defensive – two holding midfielders even after Cristiano Ronaldo went off injured, whilst Portugal offered limited attacking options.  The hosts only needed one holding midfielder on the pitch, whilst both Pogba and Blaise Matuidi remained in that role throughout.

N’Golo Kanté could have started to allow Pogba much more freedom moving forward where he has excelled for Juventus over the past four seasons, in both Serie A and the UEFA Champions League.

What would Pogba offer Manchester United?

Paul Pogba is an excellent dribbler – bringing the ball forward from centre midfield to create attacks.  This is something Manchester United do not currently have so deep in midfield with the likes of Michael Carrick, Bastian Schweinsteiger, Morgan Schneiderlin, Marouane Fellaini or Daley Blind.  That said, he could be pushed forward into the number 10 role.

The box-to-box midfielder also offers energy that some of the aforementioned ageing central midfielders don’t have.  He has no problem running up and down for 90 minutes.  He gets himself in and around the opposition penalty box and helps teammates out too – he recorded an impressive 12 assists in 35 Serie A appearances last season to go along with his eight goals.

He’s pretty solid in the air too and at 6’3″ he’s a presence in midfield.

And one thing Pogba has built a reputation on at Juventus is his ability to score goals from long range.  He has scored several screamers in Italy to excite fans.

But what does José Mourinho need to improve in Pogba’s game?

One thing that has frustrated Juventus and France fans alike is Pogba’s greed on the ball.  The 23-year-old has a tendency to hold onto the ball for too long, and ultimately, lose it, when often there has been a simple pass on.  Mourinho will drill into Pogba’s head of the importance to maintain possession for his side, and certainly not to lose it inside his own half and around the halfway line.  He’ll have more freedom in the final third though.

Indeed, Pogba loves to run at opposition with the ball.  It would be interesting to see if he continued to do this in the centre circle and other areas of the field far away from the opposition penalty area, if he is ever under Mourinho’s leadership.

Paul Pogba has a frequency to giving away free kicks and making silly fouls.  He is a holding midfielder though so naturally he is going to pick up some of the most yellow cards in the team, that’s the nature of the position.  But fouls from behind or risky fouls in positions not required to make a risky challenge can also be avoided.  He’s certainly not the best tackler which is another reason why he may be given a more attacking role.

One weakness that may be difficult to drive out of the youngster are his dips in concentration during games.  He can get away with this when United have a comfortable lead but Mourinho may be taking a risk by lining Pogba up in defensive positions in those tight games.

Overall, I think Paul Pogba is a fantastic player with great potential – I would love to see him in the Premier League as early as next season and I think there are few better coaches than José Mourinho capable of getting the best out of his potential.