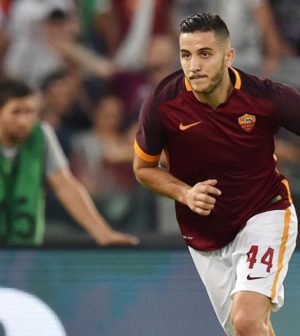 The agent of AS Roma centre-back Kostas Manolas has made a claim that Manchester United, Chelsea and Manchester City have all shown a keen interest in signing his client this summer, according to the Mirror.

Manolas is coming off the back of his second excellent season in a row in Italy, forging a reputation as one of the best centre-backs in Serie A since joining Roma from Olympiacos two summers ago.

However, the future of the 25-year-old in the Italian capital has been thrown into doubt as the Italian club have failed to agree a new contract with just two years left on his current deal.

The impressive form of the Greek international has attracted plenty of interest from the Premier League’s top clubs, with his agent, Ioannis Evangelopoulos, now being quoted in the Mirror as saying that Manchester United, Chelsea, and Manchester City are all battling for Manolas’ signature this summer.

Evangelopoulos is quoted in the newspaper as saying:

“The best clubs in Europe want him.

“There isn’t just Manchester City, but also United and Chelsea. I haven’t spoken with Roma for a while. Will he remain in the capital? No comment.”

José Mourinho has already signed Eric Bailly at Manchester United but it is not yet known whether the youngster is ready to be a first-team regular just yet.  This means the new United boss could also be eyeing up a move for a more experienced defender like Manolas for the 2016-17 Premier League season.

It is also understood that new Chelsea manager Antonio Conte is keen to bring in another centre-back as the long-term replacement of John Terry.

And both Manchester United and Chelsea could face stiff competition from Manchester City as Pep Guardiola has been linked to a couple of centre-backs this summer, including Manolas.  His arrival would be a a cheaper alternative to Everton’s John Stones who is being linked to the club for £50 million.

It looks as though we could be in for an exciting battle for the signature of Kostas Manolas this summer with his current club Roma also trying to tie him down to a longer term deal.  We shall have to wait and see in the coming weeks where the Greek will be playing his football next season.