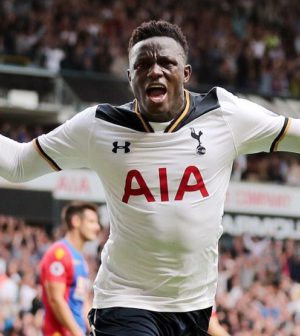 Tottenham Hotspur left it late to win their first London derby of the season as Victor Wanyama headed home in a 1-0 win over Crystal Palace.

The summer signing from Southampton scored from close range with eight minutes to go to see off a battling Palace side.
Mauricio Pochettino’s side had the better of the chances throughout the game which included Vincent Janssen missing a one-on-one after being played in by substitute Dele Alli.

The Dutch striker did not impress with his finishing having been given the full 90 minutes but did link up well with Harry Kane.  Janssen fired a few hopeful efforts way off target from long range.

Kane deserves credit for the role he played at White Hart Lane on Saturday, deeper than last season in which he was creating chances for his strike partner.  The England international also assisted Victor Wanyama’s winner as he showed great strength to head a corner into the Kenyan’s direction.

Crystal Palace were valiant in their effort and failed to create too many good opportunities of their own, only testing Michel Vorm twice with the goalkeeper stepping in for the injured Hugo Lloris.

The Eagles splashed out £27 million to land Christian Benteke from Liverpool earlier on Saturday and manager Alan Pardew will be hoping the Belgian international will be able to help with his side’s production up front.  They have lost their opening two games by the score line of 1-0 to start the 2016-17 season.

Some may say Pardew has taken a gamble on a player like Benteke, but the 25-year-old has 51 goals in 118 Premier League matches and since Palace are backed up by Mansion Group as their official sponsor whom own several online casinos such as Casino.com, rest assure they can afford this new transfer and others.

Benteke is the latest signing by Crystal Palace who have also spent £13 million on Andros Townsend and £10 million on James Tomkins this summer, as well as bringing in goalkeeper Steve Mandanda from Marseille.

Connor Wickham has started Palace’s first two games up front this season and only hit the target with one of his four efforts on goal in 180 minutes.