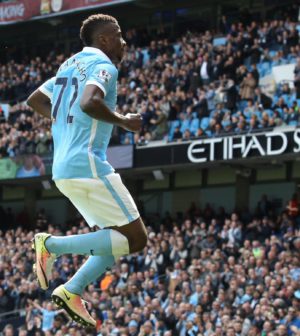 With just four days to go before José Mourinho and Pep Gaurdiola lock horns with one another at Old Trafford we take a look at how Manchester City may line-up against United.

The Spanish manager is likely to adopt a more defensive 4-5-1 formation against United on Saturday allowing him to pack the midfield and play one lone striker up top.

In between the sticks we will likely see new goalkeeper Claudio Bravo handed a debut ahead of Willy Caballero. In front of the Chilean international, Pablo Zabaleta looks set to keep his place at right-back in the side after impressing against West Ham last time out. Pep’s centre-back pairing looks increasingly likely to be the duo of John Stones and Nicolás Otamendi whilst we should see Gaël Clichy retain his place at left-back in the starting eleven.

With the likelihood of Guardiola approaching the game in a more defensive manner than we have seen in the first three games of the season, the City boss may select a midfield trio of Yaya Touré, Fernandinho and Fabian Delph who can all protect the defence as well as retain possession.  Pep Guardiola will be fully aware of United’s dominance in the midfield in their opening three games and will no doubt be hoping that his midfield trio can starve Paul Pogba of service and not give Marouane Fellaini any time on the ball.

Out on the right flank Raheem Sterling will look to continue his early impressive season form when he comes up against United, whilst on the left-hand side David Silva will start the game, leaving Kevin De Bruyne out on the substitute’s bench. De Bruyne is without question a highly-talented player but when it comes down to it Silva starts every day of the week over the Belgian. Silva will give City that creativity, class and flair on the ball needed to unlock the United defence and should the Spaniard be given time and space by the United defence, watch out for him to make them pay.

However, it will arguably be up front where all the focus will be on when the teams are announced on Saturday. With Sergio Agüero suspended, Gaurdiola could hand a first start of the season to youngster Kelechi Iheanacho as the lone front man for City. The pressure will be undoubtedly on the Nigerian’s shoulders to deliver the goods in the Manchester derby. He may not be Agüero but he is a real threat and could prove to be a real nuisance to the United back four.