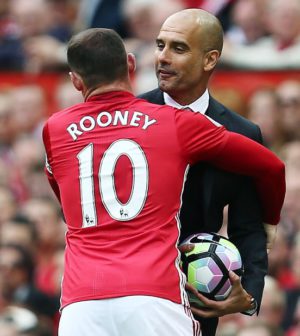 An intriguing start to the Manchester derby saw Manchester City take the lead on 14 minutes when Kevin De Bruyne finished coolly in a one-on-one situation.

Manchester United captain Wayne Rooney has so far shown his frustrations on two occasions.  The first, a little scuffle with City boss Pep Guardiola on the touchline.

The Spanish manager attempted to hold onto the football to delay a quick throw-in by Manchester United and managed to pull it off successfully.

Rooney was unsuccessful in his attempt to strip the ball quickly from the City manager whose side have dominated the opening 25 minutes of the first half at Old Trafford.

The United captain has yet to muster a chance for himself or teammates as Claudio Bravo has had a quiet half to this point.  In comparison, the defence in front of David de Gea are getting turned inside and out by City’s attacks.