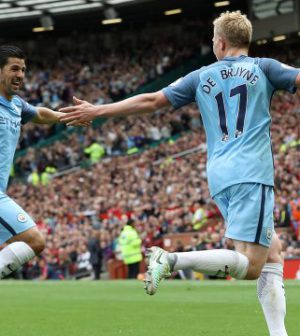 Manchester City will face German underdogs Borussia Mönchengladbach at the Etihad Stadium in their first group game in this season’s UEFA Champions League on Tuesday. After defeating Manchester United in the big derby on Saturday, it goes without saying that the Citizens are riding high on confidence. Combine that with the lackluster start Gladbach has made in the German Bundesliga – with only three points from their opening two games, it is safe to assume that Manchester City are going into this game as favorites.

Here is how Manchester City are expected to the lineup to face Borussia Mönchengladbach:

The Manchester City fans may have drawn comparisons between Claudio Bravo and Joe Hart on Saturday when the Chilean dropped a clanger on his debut against Manchester United. However, with no-one to challenge him for the number one spot, Bravo is expected to make his Champions League debut for the Citizens in this one.

If Manchester City are to succeed in challenging the op teams in Europe this season, it is inevitable that Pep Guardiola adopts a rotation policy. Therefore, I think that Pablo Zabaleta and Gaël Clichy will give Bacary Sagna and Aleksandar Kolarov a breather against Gladbach.

While Zabaleta would solidify the defense, Clichy is more mobile than Kolarov when it comes to attack.  Though he doesn’t provide such a good cross. As for Stones and Otamendi, the fitness of Vincent Kompany ensures that both of them would retain their positions in the heart of City’s defense.

After providing a goal and an assist in the Manchester deby, Kevin De Bruyne was worthy of the man of the match award which he got against Manchester United on Saturday.

After making Daley Blind look like a bystander to break the deadlock, De Bruyne then zigzagged past a couple of United players before striking the post to setup a tap-in for Kelechi Iheanacho who duly made it 2-0.  Along with the Belgium international, David Silva pulled the string in the middle of the park.

Although Manchester City did win on Saturday, they missed the services of one particular Argentine. However, much to the dismay of Borussia Mönchengladbach, Sergio Agüero will be back in the Manchester City Starting XI on Tuesday since his ban is limited to the Premier League and EFL Cup.  This is an opportunity for the superstar to keep his fitness up before he can make his domestic return.

Alongside Agüero, the likes of Raheem Sterling and Nolito are expected to lead the line for the Citizens. Sterling was relatively quiet against Manchester United before being substituted.  However, looking at his early season form, Sterling is tipped to torment the Gladbach defence on Tuesday should he start ahead of Jesús Navas.