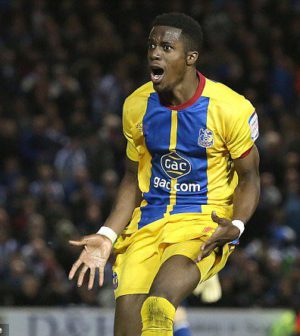 We are in for a very promising Saturday evening game when Crystal Palace take on Liverpool at Selhurst Park.

The visitors have won seven of their last eight games in all competitions whilst Alan Pardew’s side will be looking to hit Liverpool on the counter-attack with his pacey players up front.

Crystal Palace have been beaten by West Ham and Leicester in their last two games so fans have little reason to be optimistic against the Premier League title contenders.

Goalkeeper: Steve Mandanda
The French goalkeeper has yet to keep a clean sheet in his first seven Premier League games and Crystal Palace haven’t keep one so far this season.

Defence: Joel Ward, James Tomkins, Scott Dann, Martin Kelly
James Tomkins’ £10 million arrival from West Ham has so far been uninspiring as the Eagles are relying on their attack to prevent them being relegation candidates.  Former-Liverpool defender Martin Kelly should face his former-club at left-back.

Midfield: Joe Ledley, James McArthur; Wilfried Zaha, Yohan Cabaye, Andros Townsend
Jason Puncheon is a doubt so Yohan Cabaye can play the central attacking midfield role.  The French midfielder is a good playmaker but how much possession he will see in this game is questionable.  Although he only has one goal and no assists next to his name, Andros Townsend has looked a decent threat in firing shots in on goal and creating chances since his summer move from Newcastle.  Wilfried Zaha is a good threat on the right wing and should be looking to cause James Milner problems.

Striker: Christian Benteke
The club’s record signing joined from Liverpool over the summer and will be looking to haunt his club on Saturday.  Christian Benteke is Crystal Palace’s top scorer with three goals so far this season.