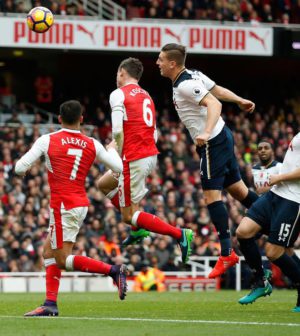 Arsenal missed the opportunity to go top of the Premier League as they were held 1-1 by rivals Tottenham in the North London derby.

The Gunners led at half-time thanks to a Kevin Wimmer own goal but were pegged back early in the second half through a Harry Kane penalty on the England international’s return after a seven-week absence.

Neither team created many chances in open play.

Petr Čech 6 – Dived out of the way of Harry Kane’s penalty but was otherwise untested during the game.

Héctor Bellerín 7 – Danny Rose created a couple of chances down the left but ultimately Tottenham didn’t score from them.  Héctor Bellerín didn’t push forward as frequently as he usually does.

Shkodran Mustafi 8 – Made a couple of important interceptions and tackles and Tottenham failed to test Petr Čech in open play.

Laurent Koscielny 6 – A couple of clumsy challenges which included fouling Mousa Dembélé at the start of the second half to concede the penalty from which Harry Kane equalised.

Nacho Monreal 7 – Made a key blocked to deny Harry Kane a second goal in the second half.  Wasn’t too supportive in attack in this game game but other than one good run from Heung-min Son he kept the Tottenham right winger under control.

Francis Coquelin 6 – Wasn’t overly secure in the middle of the park and was taken off midway through the second half for Aaron Ramsey.

Granit Xhaka 8 – Got stuck in a lot today and didn’t even pick up a yellow card.  Helped prevent Christian Eriksen from being a key player in open play.

Theo Walcott 5 – Very quiet on his return seeing very little of the ball and ultimately substituted.  Did strike the inside of the post.

Mesut Özil 8 – Provided the free kick from which Kevin Wimmer gave Arsenal the lead.  Created a number of chances and unlucky not to be on the winning side.

Alexi Iwobi 6 – Scuffed a good opportunity in the first half, saw a decent amount of possession but didn’t do a lot else with it.

Alexis Sánchez 6 – Failed to test Hugo Lloris today.  Came deep to collect the ball today but didn’t get in goalscoring positions himself.

Olivier Giroud ( 20 mins) N/A – Failed to make a similar impact to last weekend versus Sunderland and generally didn’t do much.