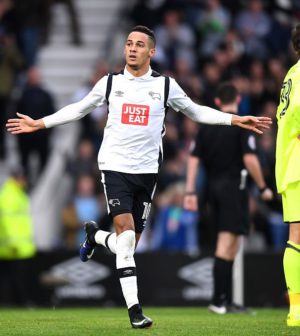 The result takes Derby County up to 5th in the table on a six-game winning streak having taken maximum points on seven of nine games under Steve McClaren.  The former-England manager took over the East Midlands club when they were in 21st position back in October.

Nicklas Bendtner gifted the hosts the lead with an own goal when Nottingham Forest were arguably on top.  There was only one team in it in the second half as a fine solo effort from Tom Ince 10 minutes into the second half and Will Hughes just after the hour saw Derby cruise to victory.

Scott Carson 7 – One fine save to deny Matty Cash in first-half stoppage time after referee Chris Kavanagh had allowed Nottingham Forest to take a quick throw-in despite Will Hughes lying on the floor with a knock.  Otherwise a quiet afternoon.

Chris Baird 8 – A lovely through ball to set up Tom Ince’s goal to make it 2-0.  Chris Baird offered support down the right wing but the best his crosses came to were winning corners.  A comfortable game defensively.

Alex Pearce 8 – Nicklas Bendtner didn’t have a single effort on the Derby goal all game as the back four were solid this afternoon.

Richard Keogh 8 – Made a key block at 0-0 and whilst Derby’s back four were solid they had to make up for a lack of protection in front of them in the opening half hour as the midfield three were caught out on the counter-attack three times.

Marcus Olsson 8 – Had some defensive work to do and offered good support going forward, putting a few teasing crosses into the box.

Jacob Butterfield 8 – Saw a lot of the ball and looked after it well.  Was ambitious with a few of his efforts on goal but Jacob Butterfield was part of the midfield that dominated the second half at Pride Park this afternoon.

Bradley Johnson 8 – Question marks over his positioning in the opening half hour but was solid after that.  Set the tone of the game by letting Ben Osborn know he couldn’t get away with dirty fouls from behind.

Tom Ince 9 – A man of the match performance from the right forward who caused lots of problems for the Forest defence.  A fine solo effort made it 3-0 when he picked up an underhit through ball to weave in and out three defenders and toe punt the ball into the far corner.  Narrowly fired wide and saw an effort blocked later in the game.

Darren Bent 5 – The Derby striker didn’t get involved in the action too often versus a back three but his runs were a threat just his teammates didn’t pick him out.

Johnny Russell 6 – Not a hugely influential performance down the left wing which included an ambitious effort that hit row Z in stoppage time.  Won a few free kicks.

Matěj Vydra (19 mins) N/A – Replaced Darren Bent but likewise saw very little of the ball and not a goalscoring opportunity.

Andreas Weimann (7 mins) N/A – A late run out for the Swede who hasn’t seen much action under Steve McClaren.

Vladimir Stojković 5 – Looked extremely dodgy at dealing with set pieces but Nicklas Bendtner and Tom Ince didn’t give the Nottingham Forest goalkeeper a chance with their finishes.  The Serbian parried a Johnny Russell effort into Will Hughes’ path for Derby’s third.

Matty Cash 7 – One of the few bright performances from Nottingham Forest today was their young right wingback.  Matty Cash brought the ball forward on a couple of occasions and forced the most difficult save from Scott Carson, though you can’t help but think that someone like Craig Bryson, Tom Ince or Bradley Johnson would have buried a similar opportunity.

Michael Mancienne 5 – One fantastic tackle in the first half to deny Tom Ince but made to look like a Sunday league footballer by the same player who made it 2-0.

Matt Mills 5 – Made a couple of key interceptions and tackles at 0-0 but fooled by Ince for Derby’s second.

Damien Perquis 6 – Didn’t go with Will Hughes for Derby’s third but made a couple of interceptions and tackles during the game.

Eric Lichaj 5 – Torn open by a Chris Baird pass of all players.  Tom Ince had the beating of the left wingback all day.

Thomas Lam 4 – A little fortunate only to receive one yellow card in this game as the Finn committed a number of fouls in the 70 minutes he was on the pitch.  The Derby midfield passed the ball around him at will.

Pajtim Kasami 6 – The only Nottingham Forest player who looked a threat all afternoon.  The former-Fulham playmaker had a couple of tame efforts on goal and created a couple more chances for teammates.  Didn’t help in preventing Will Hughes and co dominating possession in the second half though.

Ben Osborn 5 – Seemed more interested in attempting to get a Derby player sent off than winning the game this afternoon and it backfired completely for the youngster.  A horrible performance from Ben Osborn who wasn’t a goal threat and conceded possession too often.

Mustapha Carayol 4 – Lead three counter-attacks in the opening half hour when Nottingham Forest either had the same number of attackers as defenders or outnumbered the Derby defence.  Didn’t lead to a single shot on goal as Mustapha Carayol fired two efforts from long range that didn’t test Scott Carson and misplaced a pass on the other occasions.  Waiting until the hour to replace him proved too costly for Philippe Montanier’s side.

Nicklas Bendtner 2 – No supply up front and the only positive thing of note for Nottingham Forest was a dive to win a free kick on the edge of the penalty.  Nicklas Bendtner headed Derby County into a 1-0 lead and with the scoreline the same in the second half he headed against his own crossbar!  Who’s paying his wages?  The Danish striker didn’t have a single effort on the goal he was meant to be aiming at.

Apostolos Vellios (31 mins) N/A – The tall Greek striker failed to get into the game after being brought on at 0-2.

David Vaughan (7 mins) N/A – A late run out for the experienced midfielder, perhaps to help run the clock out in preventing Derby scoring a fourth.