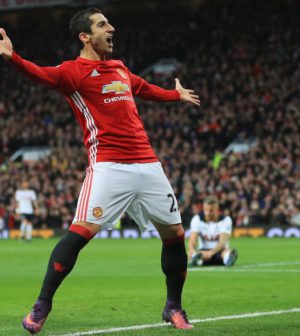 Henrikh Mkhitaryan scored his second goal in a week as Manchester United beat Tottenham Hotspur 1-0 at Old Trafford this afternoon to move within six points of the top four.

United were the better team in this game, protecting David de Gea very well whilst Paul Pogba also struck the inside of the post from a direct free kick.

David de Gea 7 – Forced to deal with Heung-min Son and Christian Eriksen long-range efforts down the middle but was otherwise well-protected.

Antonio Valencia 6 – Some nervous moments from the right-back which nearly led to setting up Dele Alli one-on-one midway through the second half.

Phil Jones 8 – Solid performance in front of David de Gea in keeping Tottenham trying to test the Manchester United goalkeeper from outside of the penalty area.

Marcos Rojo 9 – Had the better of Harry Kane all day as the England international was not a factor in this match.

Matteo Darmian 6 – Not great in retaining possession and was beaten on a number of occasions by substitute Moussa Sissoko.  Got help from Paul Pogba at times.

Michael Carrick 8 – Solid protection in front of the back four in terms of breaking up Tottenham’s play.  Looked after the ball when in possession too.

Ander Herrera 9 – Another top performance from the Spaniard who pressured Tottenham’s midfielders when in possession, won the ball back for his side and set up Henrikh Mkhitaryan’s first Premier League goal that gave United the lead today.

Henrikh Mkhitaryan 9 – A thumping finish to become the first Armenian to score in the Premier League.  Henrikh Mkhitaryan set up a half chance for Paul Pogba early in the second half in a hardworking effort down the right wing.  Was stretchered off with an ankle injury in the final 10 minutes.

Paul Pogba 7 – Forced a couple of saves from Hugo Lloris and struck the inside of the post from a free kick.  Won a few aerial battles in an energetic performance from the French international.

Anthony Martial 7 – Solid performance down the left wing and also worked hard tracking Kyle Walker defensively.  Given a breather in the final 20 minutes as José Mourinho introduced the fresh legs of Marcus Rashford to support Matteo Darmian in defence.

Zlatan Ibrahimović 6 – Brought teammates into play on a couple of occasions but otherwise a quiet game and not a huge threat on Lloris’ goal.

Marcus Rashford (19 mins) N/A – Introduced to help Matteo Darmian defend in the final 19 minutes and also an outlet down the left wing.

Eric Bailly (6 mins) N/A – A late introduction for the injured Mkhitaryan to help see out the 1-0 victory.

Hugo Lloris 7 – Made a couple of fine saves before being beaten by Henrikh Mkhitaryan’s belter.  Saved by the post from a Paul Pogba free kick too.

Kyle Walker 7 – Worked hard bombing forward down the right wing but Anthony Martial did fine some space up against him down the wing.

Toby Alderweireld 8 – Some good defending from the Belgian but was caught out by Mkhitaryan for United’s goal after Tottenham had quickly turned over possession on the halfway line.

Jan Vertonghen 7 – Was able to limit Zlatan Ibrahimović’s opportunities and didn’t have a chance with United’s goal.

Danny Rose 7 – Pressed well to win the ball high up the field but wasn’t always best in possession in United’s half.

Victor Wanyama 8 – Solid defensively but wasted a free header in the centre of goal when he found himself in acres of space from a Christian Eriksen indirect free kick cross.

Mousa Dembélé 5 – Not hugely influential before being replaced by Harry Winks midway through the second half.

Heung-min Son 5 – Quiet game from the South Korean aside from a long-range effort down the middle that won a corner from David de Gea.  Replaced by Moussa Sissoko before the hour and the Frenchman immediately looked a bigger threat.

Dele Alli 5 – Quiet game from the number 10 who moved out to the left wing early in the second half but still couldn’t get involved in anything threatening.

Harry Kane 4 – The striker failed to get involved in the game aside from winning a free kick on the edge of Manchester United’s penalty area.

Moussa Sissoko (34 mins) N/A – A good influence down the right wing as Moussa Sissoko got the better of Matteo Darmian but ultimately failed to test David de Gea or create a chance for a teammate.

Harry Winks (24 mins) N/A – Brought on to play in front of the back four and didn’t produce anything noteworthy going forward.

Georges-Kévin Nkoudou (8 mins) N/A – Never had an opportunity to get involved in the game late on.