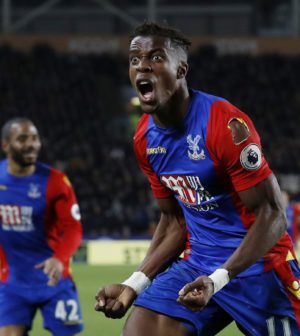 Crystal Palace kick off the Premier League weekend with the unenviable task of trying to end Chelsea’s 10-game winning streak.

The Premier League leaders are on absolute fire of late whilst the Eagles have shipped five goals in their last two outings, including three at fellow strugglers Hull City.

Chelsea have kept back-t0-back clean sheets in 1-0 victories over West Brom and Sunderland over the past week but a shut out this weekend is not gimme with Crystal Palace being the highest scorers outside the top four.

Goalkeeper: Wayne Hennessey
Wasn’t given much chance of preventing either of Manchester United’s goals on Wednesday and his back four haven’t been too kind to him – Wayne Hennessey is averaging two goals against per game in his seven Premier League starts this season.

Defence: Martin Kelly, Scott Dann, Damien Delaney, Joel Ward
Only Liverpool games have seen more goals than Crystal Palace’s through 16 games and only Hull and Swansea City have conceded more goals.  The South East London club have both one of the worst defences on paper and statistically.  Neither centre-back is the sharpest meaning that Eden Hazard could be a real threat if fit to start this one.  Diego Costa is on fire too so don’t be surprised if he’s among the goalscorers again on Saturday.

Midfield: James McArthur, Joe Ledley, Yohan Cabaye, Lee Chung-yong
Joe Ledley could come in for Mathieu Flamini in the centre of a four-man midfield as Alan Pardew looks to congest the middle of the pitch again.  James McArthur scored Palace’s goal versus Manchester United whilst Yohan Cabaye offers some creativity if he can get possession in Chelsea’s half.

Attack: Wilfried Zaha; Christian Benteke
Wilfried Zaha should be looking to attack space left behind by Marcos Alonso when Chelsea’s left wingback bombs forward.  The England international has pace to cause the Blues defence some issues in this game.  Gary Cahill is the left centre-back so the former-Manchester United man must fancy his chances.  Likewise, if the hosts can get some crosses into the box Christian Benteke is more than capable of beating any of the centre-backs in the air. 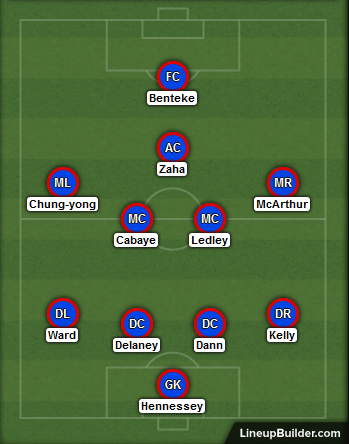