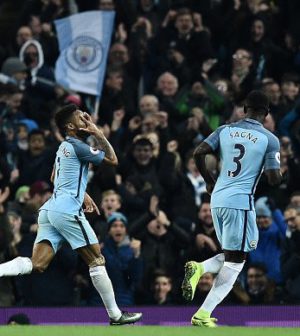 Manchester City moved into second place with a come-from-behind victory over fellow title chasers Arsenal at the Etihad Stadium.

The result leaves the Gunners nine points off the pace now after blowing 1-0 leads to lose 2-1 twice in the same week.

Pep Guardiola’s side dominated possession and territory for much of the game and will be thankful for Arsenal not scoring a second in the first half when City’s defence was a mess.

Claudio Bravo 6 – Not much chance with the goal and didn’t have a lot else to do all game.

Pablo Zabaleta 6 – The back four looked a mess in the first half but Alex Iwobi wasn’t a threat to Pablo Zabaleta.  Replaced by Bacary Sagna at half-time.

Nicolás Otamendi 5 – Let Theo Walcott go for Arsenal’s opener when the back four was completely disjointed.  Fortunate that the visitors didn’t make the most of this.

Aleksandar Kolarov 6 – Outmuscled Alexis Sánchez at one moment in the second half to deny Arsenal an excellent opportunity.  Arsenal didn’t test the makeshift centre-back enough.

Gaël Clichy 6 – Theo Walcott’s goal came from a run down the middle.  Arsenal didn’t test their full-back a great deal down the left-hand side.

Yaya Touré 8 – Was excellent in helping turn the game from 0-1 to 2-1 for his side, winning the ball back for his side in the opposition half and some nice passes in the final third.

Fernando 7 – Sufficient performance in the centre of midfield as Arsenal only scored one goal today.

David Silva 8 – Was a good threat today and supplied a superb assist for Leroy Sané’s equaliser at the start of the second half.

Kevin De Bruyne 9 – An excellent performance from the Belgian who played an excellent pass to Raheem Sterling from which the winger turned int a goal.  Kevin De Bruyne tore open the Arsenal defence time and time again, creating chances for his teammates whilst also hitting the outside of the post himself.

Leroy Sané 7 – Nicely timed run and finish for City’s equaliser and also got himself in one-on-one later.  His pace was a problem to the Arsenal defence.

Raheem Sterling 7 – Missed a great headed opportunity very early on but made up for it with a fine solo effort to win the game for Pep Guardiola’s side.

Bacary Sagna (45 mins) 6 – Came on at half-time and helped win the ball back for his side around midfield on a couple of occasions.  Barely tested in his own half.

Jesús Navas (15 mins) N/A – Created a chance for Kevin Be Bruyne immediately after coming on but otherwise a quiet cameo appearance.

Kelechi Iheanacho (7 mins) N/A – Came on to five De Bruyne a breather but barely had time to get on the ball.

Petr Čech 6 – Not much chance with Sané’s goal but beaten by the pace of Sterling’s effort at his near post.  Had made  a couple of smart saves before, one of note from Kevin De Bruyne heading into the far corner.

Héctor Bellerín 5 – Out of position time and time again defensively.  Also wasted two attacks by blazing the ball into the crowd from long range.

Gabriel Paulista 6 – Beaten by a ball over the top for Manchester City’s equaliser but not involved in the winner.

Nacho Monreal 5 – Had a tough game as Manchester City had a lot of successful attacks down his side which included Sterling cutting inside Nacho Monreal before smashing home the host’s winner.

Francis Coquelin 5 – Manchester City passed the ball around the Arsenal midfield in the second half as they dominated possession and territory.  Francis Coquelin was one of those guilty on several occasions for conceding possession inside his own half to increase the pressure on his side.

Granit Xhaka 5 – A very passive second half from the Swiss midfielder who didn’t close down the opposition much at all.

Theo Walcott 6 – Nice finish to give Arsenal the lead and dropped back often to help Héctor Bellerín in defence. Barely got on the ball though when Arsenal could have done with Theo Walcott breaking away on the counter attack at 1-0 and even 1-1 under intense pressure.

Mesut Özil 3 – Another anonymous big game from the playmaker who didn’t offer anything in attack or defence.  Strolled around the pitch instead of closing the City team down from the front.

Alex Iwobi 4 – Offered nothing going forward and was poor defensively when Arsenal were under the cosh conceding possession in his own half on more than one occasion.

Alexis Sánchez 5 – Looked decent in possession but had very little of it, especially after half-time.  A nice assist for Arsenal’s goal.

Alex Oxlade-Chamberlain (26 mins) N/A – Brought on for Alex Iwobi to offer better protection and potential counter attack but nothing materialised.

Olivier Giroud (16 mins) N/A – The French striker didn’t get an opportunity to be a supersub today.

Mohamed Elneny (13 mins) N/A – Interesting move when chasing the game late on but the Egyptian found time to pick up a yellow card.