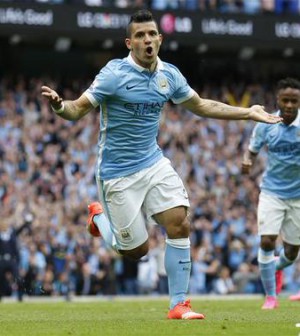 Manchester City welcome back Sergio Agüero as they look to beat Liverpool and start 2017 second in the Premier League table.

Pep Guardiola’s side enter Anfield one point behind the Reds but the return of their Argentine hitman from suspension could be just what they’re looking for on Yew Year’s Ever.

Liverpool will be without both centre-back Joël Matip and influential attacker Philippe Coutinho through injury and having had a day’s less rest earlier in the week.

Goalkeeper: Claudio Bravo
Both of these teams have had big issues with their goalkeepers this season and I think Manchester City have come off worse.  Claudio Bravo has cost his side goals and doesn’t assure his defence at set pieces either.  Expect Liverpool to look to exploit this.

Defence: Pablo Zabaleta, Nicolás Otamendi, Aleksandar Kolarov, Gaël Clichy
Nicolás Otamendi is the only centre-back Guardiola appears to trust in Vincent Kompany’s absence.  The Belgian captain remains sidelined and remains a huge loss to this back four.  Aleksandar Kolarov has found himself playing in the middle of defence more times than he has in his natural left-back role.  Pablo Zabaleta should get the nod ahead of Bacary Sagna to match up against Roberto Firmino.

Midfield: Yaya Touré, Fernandinho; Raheem Sterling, David Silva, Kevin De Btuyne
Yaya Touré put in a man of the match performance at Hull on Boxing Day and has looked good since his recall into the first team.  Fernandinho is the only defensive-minded midfielder in this five and should make for an end-to-end battle at Anfield this evening.  Raheem Sterling has found some form in time to face his former club whilst the three attacking midfielders will switch positions among themselves to confuse the Liverpool defence.  Kevin De Bruyne is the main man but hasn’t hit his heights in the past couple of games.

Striker: Sergio Agüero
Back after a four-match ban, how many goals will Sergio Agüero hit on his return?  The Liverpool defence hasn’t been so secure this season and don’t have much in the way of protection in front of them so expect the Argentine to see chances in this match.

Click here to get 8/1 on Man City to beat Liverpool!

Here is the Manchester City on paper: 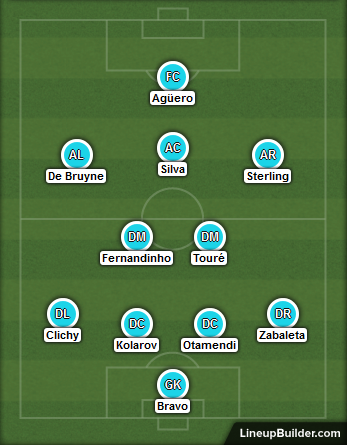