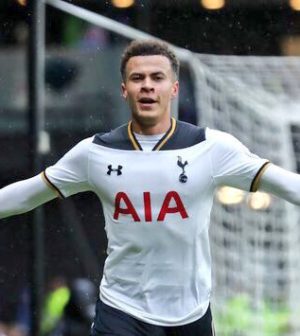 Dele Alli scored both goals in the 50th Premier League meeting between these two sides whilst Antonio Conte’s side created very little all game.

This result moves Spurs up to third whilst Chelsea’s lead at the top has been cut to five points following Liverpool’s draw at Sunderland yesterday.

Hugo Lloris 6 – One good save to deny Diego Costa from the edge of the penalty area but otherwise the Tottenham defence shielded Hugo Lloris very well.  The French international was poor with his distribution on a couple of occasions.

Toby Alderweireld 8 – Solid at the back and brought the ball out of defence on a couple of occasions.  Chelsea failed to create any clear cut chances in this match.

Eric Dier 8 – Good positioning in the middle of the back three and even ventured into the Chelsea half on occasion.  Made a number of clearances to get the ball out of harms way after teammates had conceded possession inside their own half on occasion previously.

Jan Vertonghen 8 – A couple of important tackles and interceptions broke up Chelsea attacks.  Split out wide when his fellow defenders were in possession to help stretch the opposition.

Kyle Walker 7 – Saw a fair bit of the ball as right wingback but didn’t create anything nor play any dangerous crosses into the penalty area.  Did concede possession on a number of occasions too.

Victor Wanyama 8 – Set the tempo for Tottenham early on by getting stuck in with some nice challenges to win possession for his side and start attacks.  Was very good at protecting his defence.

Mousa Dembélé 8 – Won the ball back for his side on a couple of occasions and looked after it very well.  A sensible game in midfield with short passes.

Danny Rose 8 – Gave Victor Moses problems down the wing and prevented the Chelsea wingback from making many forward ventures of his own.  Danny Rose won a couple of free kicks in dangerous positions whilst the referee was generous not to book Moses.

Christian Eriksen 8 – Played two crosses on a plate for Dele Alli to head home.  They were the only real highlights from Christian Eriksen this evening.  The Dane has now been involved in all three goals for Tottenham versus Chelsea this season.

Harry Kane 5 – Couldn’t get into the game.  Chelsea marked Harry Kane out of the match.  The Spurs striker saw very few touches of the ball and no efforts on goal.

Harry Winks (17 mins) N/A – Mauricio Pochettino introduced the 20-year-old as fresh legs in the middle of the park to help see out the 2-0 result.

Moussa Sissoko (5 mins) N/A – Replaced Dele Alli – the third time in his last four matches the England international has been replaced whilst on a hat-trick.  Late run out for Tottenham’s big summer signing.

Thibaut Courtois 5 – Didn’t have a chance with Spurs’ opener but arguably could have spread himself for the second.  Didn’t make a single save all game.

César Azpilicueta 5 – Dele Alli owned the Spaniard who has been one of the best defenders in the Premier League so far this season.

Gary Cahill 6 – Made a couple of key tackles and interceptions and helped shut Harry Kane down.

Victor Moses 5 – Couldn’t get forward as Danny Rose pinned Victor Moses in his own half.  Fortunate not to be booked for either of his fouls on the Spurs left wingback around his own penalty area.

N’Golo Kanté 5 – Failed to break up much of the possession this evening, fortunate to escape a booking and substituted before the final whistle.

Nemanja Matić 8 – Fairly solid game in the Chelsea midfield, winning the ball back for his side a number of times, retaining possession and having an effort on goal, albeit dragging it wide.

Marcos Alonso 6 – Kyle Walker wasn’t a big threat down the wing.  Marcos Alonso put two teasing balls into the Tottenham area too but otherwise a quiet game, replaced just after the hour.

Pedro 5 – Poor in attack and had some miscommunication issues with teammate Diego Costa.  Not a threat and even picked up a yellow card.  Surprised he remained on the pitch for the full game.

Diego Costa 5 – Wasn’t the striker’s night but credit to Diego Costa for not losing his temper as he would have previously.  Woeful with most of his efforts, most notably one from 18 yards at 0-0.

Eden Hazard 5 – Off his game this evening – didn’t test Hugo Lloris, didn’t create anything, and barely a successful dribble.

Willian (26 mins) N/A – Attacking replacement for Marcos Alonso but didn’t get on the ball very often and didn’t make any impact.

Cesc Fàbregas (12 mins) N/A – Creative midfielder brought on to change the game with little time left but the former-Arsenal captain didn’t get involved.