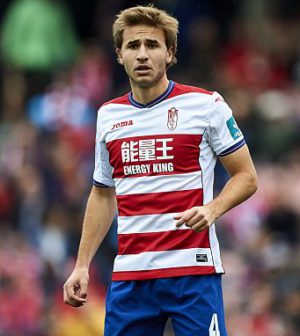 It is well known that Arsenal manager Arsène Wenger likes talented youngsters who are not getting the chance their talent deserves. For instance, when Arsenal signed Cesc Fàbregas from Barcelona, his talent was quite obvious, but due to the fact that the likes of Xavi and Andrés Iniesta were ahead of him, he was unable to break into the first team picture.

This encouraged the Spaniard to leave Barcelona for Arsenal when Wenger came calling. Fabregas became a world class player under Wenger and this has help Arsenal sign other highly-rated youngsters. However, things appear to have changed in the recent past and there are times that upcoming players reject the opportunity to sign for Arsenal and play under the French manager.

One of such player is Barcelona starlet Sergi Samper. According to the young Spaniard, he rejected the chance to sign for the Gunners last summer choosing to instead remain at Camp Nou and fight for his place in the first-team.

Samper has been at Barcelona since 2001 after joining the club at just six years old. He was a regular for the B team up to the end of last season but wasn’t getting playing time with the first team which encouraged the Arsenal manager to make a move for him. As a result we’ve seen very little of him on the La Liga highlights videos.

The now 21-year-old has been linked with a move to the Premier League giants for some while but it appears it was only last summer the club actually made a formal offer for his services. This much has been confirmed by the player to Sky Sports News:

“I did not want to listen to [Arsene] Wenger. I told him clearly that I wanted to stay, I wanted to succeed at Barcelona, and what would make me happy was succeeding at Barcelona in the future.”

Sergi Samper has a bright future in the game but it is obvious he is one of those players who are passionate about making it at Barcelona. He will undoubtedly have been a good signing for Arsenal, especially now that the club could do with a player in the mould of Santi Cazorla who is currently out injured.

The young midfielder is currently on loan to La Liga side Granada to gain experience as the likes of Sergi Busquets, Iniesta, Ivan Rakitić and André Gomes are all ahead of him in the pecking order at the club.