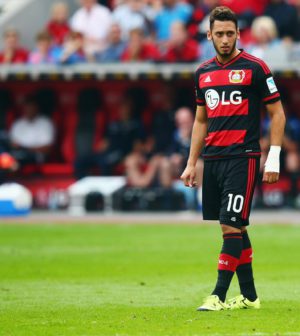 Conte is reportedly ready to step up his interest in Çalhanoğlu as the report says that Chelsea are set to make a £15 million move for the Turkish international this month and the recent departure of Oscar to China has opened up a space in the squad for the midfielder.

Fanatik are quoted as saying:

The report states that Chelsea sent scouts to watch the German-born playmaker in action during Bayer Leverkusen’s 1-1 draw at neighbours FC Köln just before the winter break in Germany.  Çalhanoğlu had a frustrating day that afternoon, firing effort after effort on goal but failing to get on the scoresheet.

However, Chelsea scouts weren’t the only one in attendance at the Rhein Energie Stadium that afternoon as the report states that representatives from Arsenal, Manchester United, Tottenham Hotspur and Everton were all keeping an eye on the German-born midfielder.

The young midfielder already has 26 caps for Turkey and has excelled in the German Bundesliga for the past three-and-a-half years, initially with Hamburger SV before moving to the Bay Arena in 2014 for £12.5 million.