Antonio Conte Given Go Ahead to sign Uruguayan International 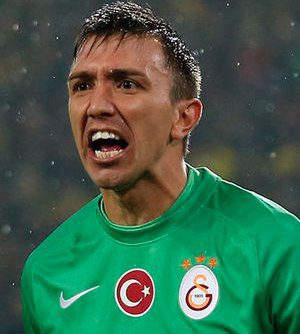 Chelsea are looking to sign a new goalkeeper before allowing Asmir Begović to leave.

According to reports in Turkey, the Premier League leaders are chasing Galatasaray goalkeeper Fernando Muslera.

It has previously been reported that Antonio Conte will not allow the current Chelsea backup to leave until he has found a suitable replacement.

Asmir Begović has found it impossible to break into the first team behind the talented Thibaut Courtois.

According to reports the former-Stoke City number one may get his wish as AjansSpor are reporting that Chelsea are chasing Fernando Muslera and that a move to the Premier League side would be a ‘dream’ for the goalkeeper.

The report states that the Blues want to make a move for the Uruguayan international over the summer.

Muslera has been a key player for Galatasaray since his €7.65 million move from Lazio back in 2011, winning three Turkish Süper Lig titles in his first five seasons and a further three Turkish Cups.

The 30-year-old is quoted in the report as saying:

“My dream is of course playing in the Premier League. We’ll see what happens.”

The Uruguayan’s contract situation is also of concern to Galatasaray as it expires in 18 months, meaning they may feel they need to cash in on the goalkeeper this summer.