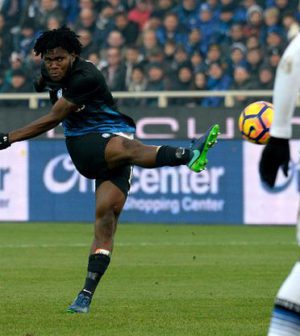 Chelsea are confident of agreeing a deal with Atalanta for defensive midfielder Franck Kessié despite seeing their opening £27 million bid rejected, according to the Daily Star.

The 20-year-old moved to Serie A side in 2015 and spent last season in the second tier with promotion-chasing Cesena.  Kessié broke into the Atalanta team this season where he has been highly impressive in breaking up the play of the opposition whilst scoring six goals in 16 league appearances also.

Kessi’s form in helping Atalanta to a surprise sixth place in the league table has attracted interest from a number of Premier League clubs.  The Daily Star are today reporting that the player’s agent, George Atangana, has confirmed that Arsenal, Chelsea and Liverpool are all among the clubs to register interest in the Ivory Coast international.

It looks as though the Premier League leaders have stolen a march on their rivals as the report says the Blues have made an offer of £27 million after holding talks with Atangana.

The newspaper says that Chelsea made an offer of £21 million up front with a further £6 million in add-ons. However, the report goes on to say that Atalanta have rejected the offer but that the Premier League side remain confident that a deal is there to be agreed.

Kessié is reportedly interested in joining Chelsea who could be prepared to agree a deal this month which would see the midfielder loaned back to Atalanta for the remainder of the 2016-17 season.

The young midfielder is on his way back to Italy following Ivory Coast’s elimination from the African Cup of Nations on Tuesday which saw the defending champions take only two points in their three group games as part of a disappointing campaign.

Following the sales of John Obi Mikel and Oscar earlier this month, Chelsea manager Antonio Conte could certainly be interested in adding another central midfielder to his squad.

We shall have to wait and see how things develop in the final week of the January transfer window and whether Arsenal or Liverpool step up their own interest in the player.