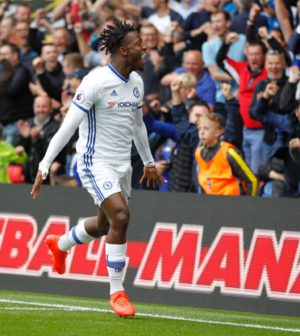 Chelsea host fellow London side Brentford in the FA Cup fourth round at Stamford Bridge on Saturday.

Antonio Conte is expected to ring the changes ahead of a trip to Anfield on Tuesday night to face Liverpool in the Premier League.

The visitors this weekend are in the bottom half of the Championship, closer to the relegation zone than the playoffs but not expected to be involved in either a relegation battle or promotion contention so could focus on a cup upset this weekend.

Here is the Chelsea team I think we’ll see named to face Brentford:

Goalkeeper: Thibaut Courtois
With Asmir Begović trying to push through a move to Bournemouth before the end of the January transfer window we could see Thibaut Courtois continue in goal for the weekend ahead of third-choice goalkeeper Eduardo.

Defence: Nathan Aké, John Terry, Kurt Zouma
The regular back three are expected to be rested this weekend with Kurt Zouma and John Terry certain get a run out on Saturday.  They should be partnered by Nathan Aké after his recent recall on loan from Bournemouth.  The youngster had been highly-impress during the first half of the season but has been brought in for cover in league matches with Branislav Ivanović closing in on a move to Zenit St. Petersburg.

Midfield: Ola Aina, Cesc Fàbregas, Nathaniel Chalobah, Marcos Alonso
N’Golo Kanté and Nemanja Matić should be rested ahead of the Liverpool clash so Cesc Fàbregas will get another start in the centre of the park looking to maintain possession and take the game to Brentford.  The Spaniard is expected to be partnered alongside Nathaniel Chalobah.  Fellow youngster Ola Aina can give Victor Moses a rest by starting as the right wingback.  Conte has little options to replace Marcos Alonso so the left wingback could keep his place as he did in the third round.

Attack: Willian, Michy Batshuayi, Ruben Loftus-Cheek
Willian hasn’t started the past couple of games so will face Brentford from the start tomorrow.  Diego Costa and Eden Hazard will get a rest so Michy Batshuayi will be given his chance in the cup once more having not been trusted in the Premier League this season.  Ruben Loftus-Cheek hasn’t seen much action of late either and is also expected to be named in Conte’s starting XI to face Brentford.

Click here to get 5/1 on Chelsea to beat Brentford!

Here’s how I think Chelsea will line up: 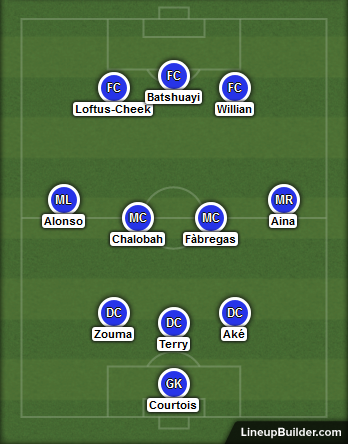