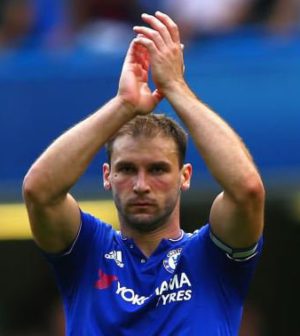 Chelsea manager Antonio Conte has confirmed to the press that the Blues will not stand in the way of Branislav Ivanović should the Serbian choose to leave Stamford Bridge this month. The Italian manager confirmed he is happy for Ivanović to continue at Stamford Bridge but will understand if the 32-year-old decides to leave the club in search of regular playing time elsewhere.

“Ivan deserves great respect for his career at Chelsea. He won a lot with this team.

“When one player has the habit to play every game and it happens that you are not playing regularly, it’s not easy to accept this decision.

“Ivan knows well the situation and I’m pleased if he remains here, if he stays with us. But in this situation, for sure, the player must make the best decision for him, for his family.”

Branislav Ivanović has had a successful in West London since joining the club in 2008 from Lokomotiv Moscow – winning the Premier League two times, the UEFA Champions League and three FA Cup titles as well as scoring the winner in the 2013 UEFA Europa league. However, he has found playing time hard to come by so far this season under Conte.

The Chelsea manager has preferred to play Victor Moses in the right wingback position while the trio of César Azpilicueta, Gary Cahill and David Luiz have been the regular choice as at centre-back in Conte’s successful 3-4-3 formation. This situation has left Ivanović frustrated and is now said to be considering his options with less than 72 hours left until the end of the winter transfer window.

Ivanović has so far been linked with West Brom and Zenit St. Petersburg. Considering the form of Victor Moses, it may be best for Chelsea to sell the Serbian but perhaps it wouldn’t be ideal right now. Moses may be doing very well at the moment but who replaces him if he is injured, loses form or is suspended? The Serbian, who reportedly earns £65,0000-a-week with Chelsea will certainly not lack suitors should Chelsea choose to sell him this month but it is a move Conte and his team could end up regretting.