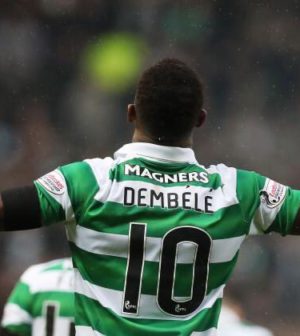 Sensational news by Sky Sports this evening claims that Chelsea are working on a deal to sign highly-rated Celtic striker Moussa Dembélé before the transfer window closes in less than 48 hours.

Chelsea currently have only Diego Costa as a reliable striker at the club and could do with another striker to act as a backup to the Spaniard.  And Sky Sports are this evening reporting that the Premier League leaders could be signing £40 million-rated Dembélé before the window closes tomorrow night. Although Costa’s future for this transfer window seems to be no longer in doubt, with Michy Batshuayi struggling to make impact at the club, it is obvious Chelsea could do with the signing of another striker.

According to the report, Celtic are not interested in selling Dembélé this month but may be forced to sell him if an offer of at least £40 million is made for the 20-year-old. The former-Fulham youngster has been linked with Cheslea, Arsenal, Bayern Munich, Paris Saint-Germain and Tottenham in the last few weeks which is testament to how great he has been in Scotland.

Having moved North of the border from Fulham last summer, Dembélé has settled down superbly in Glasgow and has emerged one of Celtic’s best players. He has scored 20 goals in 38 games in all competition for the Hoops. He even did well in the UEFA Champions League, scoring three goals for a team that were eliminated at the group stage.

Chelsea have also been heavily linked with the signing of former-Athletic Bilbao striker Fernando Llorente who is currently with Swansea City but it appears that deal has broken down.

Signing Moussa Dembélé would be a masterstroke by Chelsea. Judging by Costa’s injury history and his penchant to get in trouble with referees, he can’t totally be relied upon. A plan B to the Spaniard would certainly be a welcome development for Blues fans.