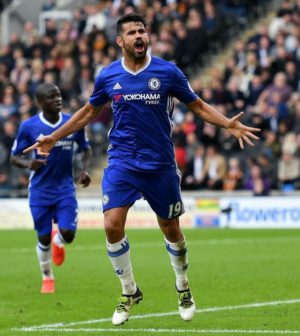 Chelsea will be looking to extend or at least maintain their 10-point lead over Liverpool when they face the Merseysiders at Anfield this evening.

Antonio Conte’s side have an eight-point lead over Arsenal in second and many believe a victory over the Reds would be as good as having one hand on the Premier League trophy.

The Blues were comfortable 4-0 winners over Brentford in the FA Cup on Saturday in which their Italian manager made a number of changes to his starting XI in preparation for this game.

Here is the Chelsea team I think we’ll see this evening:

Goalkeeper: Thibaut Courtois
Thibaut Courtois will return for the Premier League action after Asmir Begović kept goal in the FA Cup over the weekend.

Defence: César Azpilicueta, David Luiz, Gary Cahill
César Azpilicueta was a surprise starter versus Brentford, partnered by John Terry and Kurt Zouma.  The latter two will drop to the bench this evening with the first choice trio reuniting as David Luiz and Gary Cahill will be recalled.

Midfield: Victor Moses, N’Golo Kanté, Nemanja Matić, Marcos Alonso
Antonio Conte has no absentees in his midfield so his preferred four can all start this one.  N’Golo Kanté and Nemanja Matić should come back in to protect the back three with Cesc Fàbregas and Nathanial Chalobah dropping out.  Victor Moses and Marcos Alonso face little competition in the wingback roles.

Attack: Pedro, Diego Costa, Eden Hazard
Diego Costa and Eden Hazard were rested versus Brentford and will go back into the starting lineup this evening.  This are the two key players in the Chelsea attack to unlocking the Liverpool defence so don’t be surprised if either are among the goalscorers.  I think we’ll see Pedro get the bod ahead of Willian down the right wing.

Here is the Chelsea team on paper: 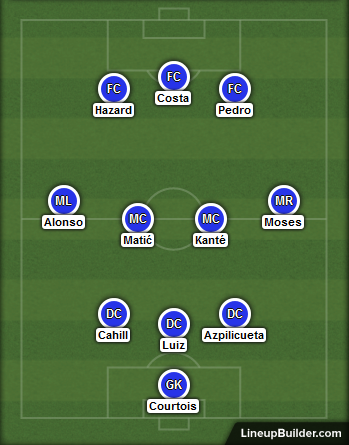