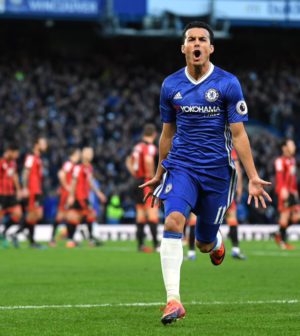 Chelsea will be looking to restore their 10-point lead at the top of the Premier League with victory at London rivals West Ham on Monday night.

Victories for Tottenham Hotspur and Manchester City over the weekend have shrunk the Blues’ lead at the top to single digits, at least temporarily.

Hosts West Ham need one point to move back into the top half whilst a victory at the London Stadium would move them into ninth position after 27 games.

Here is the Chelsea team I think we’ll see face the Hammers:

Goalkeeper: Thibaut Courtois
The Belgium international’s place in the starting XI is under no threat for Monday’s game or the rest of the season.

Defence: César Azpilicueta, David Luiz, Gary Cahill
Antonio Conte has no fresh injury concerns heading into their trip across the city.  We don’t see any reason for the Italian to change his back three for this game so John Terry and Kurt Zouma will have to make do with places among the substitutes at best.

Midfield: Victor Moses, N’Golo Kanté, Nemanja Matić, Marcos Alonso
Nemanja Matić should get a recall in the centre of midfield after Cesc Fàbregas got the nod in last weekend’s 3-1 victory over Swansea City in a game they expected to dominate possession.  Conte may want to have more protection in his midfield for the trip to West Ham, though in truth the home side don’t have a great deal or attacking threat in the centre of the park.  Marcos Alonso and Victor Moses will keep their places, offering width from wingback.

Attack: Pedro, Diego Costa, Eden Hazard
Eden Hazard is a slight doubt having picked up a knock in training last week but it appears the Belgian superstar will be good to go at the London Stadium.  On the opposite flank, Pedro is in fine form and should keep his place ahead of Willian.  Diego Costa remains the striker.

Here is how we think Chelsea will line up: 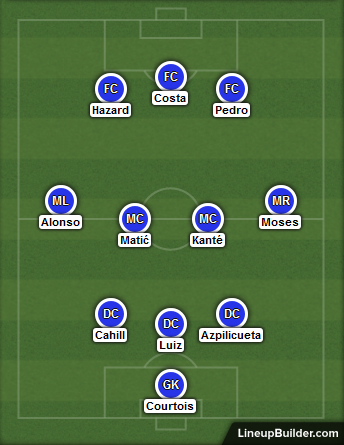