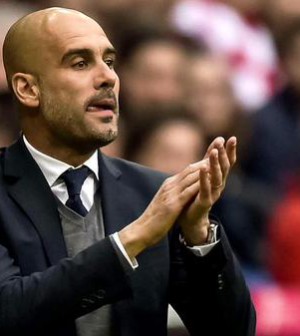 Sky Sports pundit and former-Liverpool captain Jamie Carragher believes that Manchester City still have a lot of work to do if they are to finish in the top four and qualify for next season’s UEFA Champions League.

Pep Guardiola’s side are currently in third place, below Tottenham Hotspur on goal difference but 10 points behind runaway leaders Chelsea.

However, Manchester City are only six points ahead of Arsenal in fifth with the Gunners having a game in hand.  And Manchester United are only one point behind Arsenal with a game in hand on Guardiola’s side also.

The Citizens were held to a disappointing 0-0 draw at home to Stoke City on Wednesday night and have games against Liverpool (home), Arsenal (away), Chelsea (away) to come.

Jamie Carragher is quoted in the Express this morning as saying the following:

“Even if they’d [Manchester City] won [against Stoke] tonight they would have closed the gap on Chelsea, but they’d still be closer to challengers behind them for the top four.

“I think top four is still a big worry for City and even Tottenham.

“There’s four or five, maybe even six top managers in this league who are going to be criticised if they don’t win the league.

“So they want to bounce back next year. The ones who find themselves in the Europa League are going to find it very difficult to mount a title challenge when you’re playing Thursday night and Sunday. You know the difficulties that brings with travel time.”

Who do you think will finish in the top four this season?