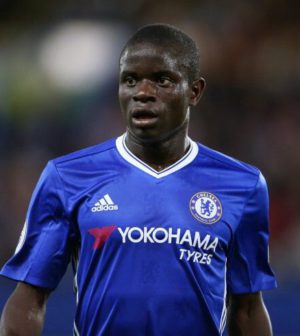 Chelsea complete the lineup for this season’s FA Cup semi-finals with a 1-0 win over 10 man Manchester United at Stamford Bridge this evening.

Ander Herrera was dismissed for the visitors after receiving two yellow cards in the opening 35 minutes – the second of which many will feel was harsh.

Man of the match N’Golo Kanté scored the game’s only goal, catching David de Gea by surprise from 25 yards early in the second half.

CSAR’s player ratings from Chelsea 1-0 Manchester United are as follows:

Thibaut Courtois 7 – Made a good save to deny Marcus Rashford one-on-one just before the hour.

César Azpilicueta 8 – Solid defensively when called upon and supported the attacks down the right.  Fired two efforts into row Z from long range.

David Luiz 7 – Completely misjudged a long ball that led to Rashford seeing a one-on-one in the second half.  Spared by his goalkeeper.

Gary Cahill 6 – Turned inside-out by Marcus Rashford in one of United’s only attacks.  Conceded possession poorly on more than one occasion when under no pressure.

Victor Moses 7 – Had a decent game getting forward down the right wing, fired in a couple of chances but didn’t create much.  Didn’t have much at all to do defensively.

N’Golo Kanté 9 – Conceded possession a couple of times early in the game but was a man of the match candidate afterwards.  Scored the key goal, was good around the edge of the penalty area and started a number of attacks.

Nemanja Matić 7 – Brought the ball towards the Manchester United penalty area a number of times but didn’t make any incisive passes to cut open the opposition’s defence.

Marcos Alonso 8 – Offered good width down the left but didn’t put any notable crosses into the box.  Under virtually no pressure all-game defensively.

Willian 8 – Excellent game down the left wing, caused Matteo Darmian a number of problems and created a number of opportunities.

Diego Costa 6 – A nuisance to Marcos Rojo and was back to his old diving and wrestling tactics.  Missed a free header from a corner that ought to been 2-0.  Booked late on for a hack on Phil Jones.

Eden Hazard 8 – Produced some excellent runs in the first half and forced a super save out of David de Gea early on.  Drew the red card from Ander Herrera.  Not as threatening in the second half as United kept the Belgian man marked.

Kurt Zouma (2 mins) N/A – Made an important header with his first touch.  Made a couple further interceptions.

David de Gea 8 – Produced two world class saves in the first half but was caught out by surprise from N’Golo Kanté’s 25-yard strike that opened the scoring.

Antonio Valencia 7 – Made a number of tackles but had very few opportunities to get forward.  Made a key interception to deny Eden Hazard a late tap-in.

Chris Smalling 8 – Made a couple of important interceptions and blocks to keep Chelsea at bay.  The home side didn’t threaten David de Gea too often despite all the possession, territory and playing more than half the game with an extra man.

Marcos Rojo 8 – Had a good, albeit, feisty, game against Diego Costa.  Was lucky that Willian didn’t take advantage of skipping past Marcos Rojo’s lunging challenge to make it 2-0 15 minutes from time.  Made a block in stoppage tie to deny Diego Costa making it 2-0.

Matteo Darmian 5 – Willian had a lot of success down the right wing for Chelsea.

Phil Jones 8 – Did his job in closing down Eden Hazard and co quickly and escaped a booking despite a number of fouls.

Ander Herrera 5 – Arguably sent off harshly having been booked for both of his fouls.  The second would rarely be shown but perhaps Phil Jones’ foul and stern warning from the referee seconds before prompted Michael Oliver to punish United for repetitive fouls.

Henrikh Mkhitaryan N/A – Didn’t get much of a chance in possession and was replaced before half-time following the dismissal of Ander Herrera.

Paul Pogba 6 – Some good moments in the first half, showed his strengths at times but was out of the game when United were reduce to 10 men.

Ashley Young 6 – Spent most of his time defending as he was rarely able to venture forward given Chelsea’s possession.

Marcus Rashford 5 – Missed United’s best chance of the game which he created by himself by ghosting past Cahill.  Marcus Rashford otherwise had no supply.