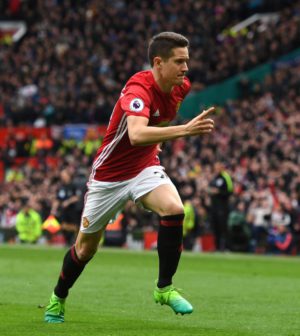 Manchester United kept up their battle for a top four place and handed Chelsea fans a few nerves in their title race as the Red Devils won 2-0 at Old Trafford this afternoon.

Marcus Rashford and Ander Herrera scored early goals in each half as Antonio Conte’s side were tactically out-mastered by José Mourinho as the Blues failed to fire a single effort on target over the 90 minutes.

The result leaves Chelsea four points ahead at the top of the Premier League with six games to go having been 10 points clear of Tottenham only a few weeks ago.

David de Gea 6 – The Manchester United goalkeeper wasn’t forced into a single save all game.

Eric Bailly 8 – A rock at the back for United who cut out the odd pass and made important tackles in his own half to break up Chelsea attacks.

Marcos Rojo 9 – Kept Diego Costa under control as he helped his side prevent the visitors getting a single effort on target all game.

Matteo Darmian 7 – Pedro found space twice in quick succession in the second half; the only time Chelsea got behind United’s three centre-backs all game as José Mourinho’s tactics worked perfectly.  Aside from this moment Matteo Darmian had a fine game.

Antonio Valencia 6 – Aided by Marcos Alonso pulling out in the warm-up; Antonio Valencia wasn’t heavily involved defensively.  The Ecuadorian didn’t venture too far forward as he usually does.

Ander Herrera 9 – A man of the match performance in keeping Eden Hazard quiet for 90 minutes and still finding time to set up the opening goal with a fine through ball and then score United’s second with the aid of a deflection.

Marouane Fellaini 8 – A solid defensive performance in midfield from the big Belgian who won the ball back time and time again.

Paul Pogba 7 – Saw a fair bit of the ball and provided a couple of nice touches.  Got stuck in a couple of times.

Ashley Young 7 – One or two occasions when he was caught out of possession defensively down the left.  Didn’t have his shooting boots on in attack.

Jesse Lingard 7 – Worked hard in attack but wasn’t a threat to Asmir Begović.  Linked up very well with Marcus Rashford up front.

Marcus Rashford 9 – A mature performance from the 19-year-old who scored the opener and was a constant threat to David Luiz with his dribbling.

Michael Carrick (31 mins) N/A – Brought on to help see out the victory and was solid in the middle of the park during his half-hour on the pitch.

Zlatan Ibrahimović (8 mins) N/A – Late run out and found time to pick up a yellow card.

Timothy Fosu-Mensah (1 min) N/A – Brought on in stoppage time to add another appearance next to his name and help see out the final few seconds.

Asmir Begović 6 – Replacing the injured Thibaut Courtois, Asmir Begović was well-beaten by Marcus Rashford early on and not given a chance with the second goal due to a wicked deflection.  The Bosnian only made one save.

Kurt Zouma 6 – Not greatly at fault for either goal and offered width down the right going forward in the final 20 minutes.

David Luiz 3 – Was totally off it today.  Terrible positioning and generally all over the place.  Bizarrely static for United’s second goal in which otherwise he could have blocked the deflected effort.

Gary Cahill 7 – Strange decision to pick Jesse Lingard up off the ground seconds before United scored their second but wouldn’t have been expected to cover the space anyway.  Made a number of challenges to help protect his goalkeeper.

Victor Moses 5 – Quiet game going forward and didn’t offer the best of protection versus Marcus Rashford or Ashley Young running down the wing either.

N’Golo Kanté 7 – A rare defeat for the French midfielder who was arguably Chelsea’s best player on the day.  N’Golo Kanté did break up possession a number of times but even then he wasn’t at his usual best.

Nemanja Matić 5 – Ineffective in midfield as he failed to win back possession for his side very often and didn’t get himself on the ball very often either when Chelsea were in possession.

César Azpilicueta 5 – A largely quiet game from the Spaniard at wing back who did offer some support going forward in the final 20 minutes.

Eden Hazard 5 – Very quiet performance from the Belgian superstar who was marked out of the game by Ander Herrera.  Eden Hazard failed to find any free space and at times looked frustrated.

Pedro 5 – Missed Chelsea’s best opportunity in the game and was largely anonymous.

Diego Costa 4 – Lost the head-to-head battle with Marcos Rojo, got booked for dissent and didn’t threaten David de Gea at all.

Cesc Fàbregas (37 mins) N/A – Chelsea did see more of the possession after falling two goals behind but even Cesc Fàbregas couldn’t help his side create any opportunities.

Willian (25 mins) N/A – Brought on to spark some life into Chelsea’s attack but the Brazilian didn’t add anything.

Ruben Loftus-Cheek (8 mins) N/A – A late run out for the youngster who didn’t do anything of note.