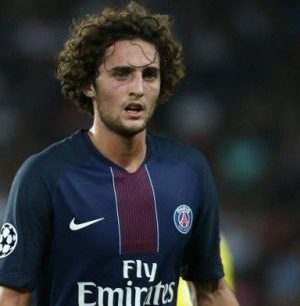 This season could well be the first time that Arsenal fail to finish in the top four in two decades under Arsène Wenger. And since their UEFA Champions League exit at the hands of Bayern Munich, the question on everyone’s lips has been whether the Frenchman will stay on as the Gunners’ manager beyond this summer.  That question remains unanswered, but it appears Wenger is already planning for when the transfer window opens in a few months’ time.

According to recent reports in France, Arsenal are looking to rival Barcelona in the chase to sign Paris Saint-Germain’s highly sought-after central midfielder, Adrien Rabiot.

Now 21, Rabiot has been with PSG since 2010, initially breaking into the first team back in 2012. However, since that point he has found regular first-team football hard to come by, despite his obvious talent.

There comes a time when a professional footballer has to say enough is enough and move on. Rabiot’s opportunity could be this summer, and I’ve no doubt he’ll have more than just Arsenal and Barcelona trying to sign him come that time.

A move to the Emirates Stadium must be very appealing to the young French midfielder. He’d be joining a manager who excels when it comes to giving youth an opportunity, and he can expect more game time in North London as Arsenal’s options in that area of the field aren’t exactly overflowing right now.

Game time would be a reason not to sign for Barcelona. They currently have Ivan Rakitić, Sergio Busquets, Andrés Iniesta, André Gomes, Rafinha Arda Turan and others all vying for three starting spots in the Catalan club’s midfield.  Current manager Luis Enrique is also departing at the end of this season and his replacement has not yet been announced.

In terms of a talent, Rabiot is that good I believe he could start regularly for almost any team in the world given the opportunity, and he epitomises the modern-day central midfielder who works tirelessly on both sides of the ball.  Arsenal fans will be hoping that Le 10 Sport are accurate claiming their club is showing interest in signing Adrien Rabiot as he can certainly be considered an upgrade to what they currently have in their squad.